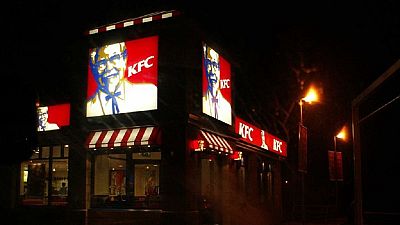 Zimbabwe’s government is struggling to contain a foreign currency shortage that is beginning to bite as shops and restaurants including global fast-food chain, KFC temporarily closed their outlets.

A notice at KFC outlets in the capital Harare and Bulawayo said ‘we are unable to source stock from our suppliers as they require US dollars’.

Prices of basic goods, medicines and drugs, building materials and public taxis have risen by at least 50 percent in the last week, causing panic buying and shortages.

The latest crisis was triggered by fiscal and monetary changes announced on Oct. 1, including a 2 percent tax on money transfers and separation of cash dollars and foreign inflows from bond notes and electronic dollars, that caused the collapse of the surrogate currency on the black market.

However, the bigger problem for the country is a $17 billion domestic and foreign debt, a $1.8 billion trade deficit that has worsened dollar shortages and lack of confidence in the ruling party by citizens still traumatised by hyperinflation.

The economic crunch is increasing political tension after a July vote that was supposed to lay the foundation for Zimbabwe’s recovery was instead followed by turmoil that left six people dead after an army crackdown.

Finance minister Mthuli Ncube wxho on Wednesday said the World Bank and the International Monetary Fund (IMF) have approved the country’s plans to clear more than $2 billion in foreign arrears.

Zimbabwe abandoned its own currency in 2009, adopting the use of foreign cash. The government later issued a surrogate currency known as ‘bond notes’ in 2016 to ease the continuing cash shortage.

Ncube on Wednesday added that the bond note and electronic dollars would remain officially pegged at 1:1 to the U.S. dollar as the government seeks to protect people’s savings.

$100 in bond notes was worth $49 cash dollars on the black market last week but was worth only $26 on Wednesday.

Ncube said the government would also gazette rules protecting foreign dollar inflows to ensure the money was not taken by the central bank or government, good news for mines outraged by the U.S. dollar shortages.