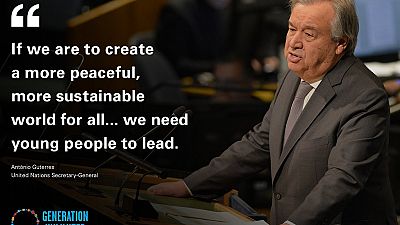 The United Nations on Monday launched the Generation Unlimited campaign that aims to promote education, training and employment of young people all over the world.

“No matter who you are, where you’re from, your skin colour, your gender identity, just speak yourself,” BTS group leader Kim Nam-jun told a packed hall at the launch of the UNICEF youth campaign.

I have many faults and I have many more fears but I am going to embrace myself as hard as I can and I am starting to love myself.

Our #Youth2030 message to young people:

“Join us. Sign up. Volunteer. Vote. Be part of the solution. We need you as partners and leaders.”

I am honoured to be part of the #GenUnlimited Leaders Group. Thank you unicefchief Henrietta Fore for the great job you and UNICEF are carrying out to benefit the youth. I look forward to working with the youth

We do not champion the cause of youth opportunity and hope as a favour, but rather as the necessary, undeniable, embrace of our collective future #Youth2030 #GenUnlimited https://t.co/Y4o3Zq3IKi pic.twitter.com/hInnr4PRnJ

The lead singer of the world’s most popular boy band said there were times when he wanted to quit music but he overcame his insecurities by listening to the “small voice that said, wake up man, and listen to yourself.”

“I have many faults and I have many more fears but I am going to embrace myself as hard as I can and I am starting to love myself,” he said.

Among South Korea’s best known and most lucrative musical exports, BTS made music history this year by becoming the first K-Pop group to top the Billboard 200 music charts.

The septet will bring its “Love Yourself” tour to New York for a series of concerts next week including its first-ever stadium performance.