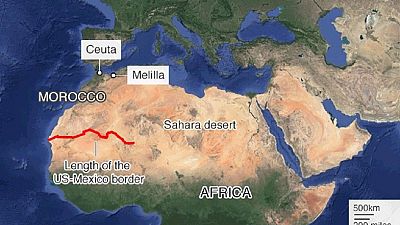 Spanish foreign minister Josep Borrell has disclosed that United States president Donald Trump had given his country an advice on how to curb the rising incidence of migration. Build a wall across the Sahara desert.

Borrell, speaking for the first time on the event at an event in the capital Madrid, added that he disagreed with Trump’s strategy. The BBC quotes Spain’s foreign ministry as confirming the incident.

He was part of a high-level Spanish delegation that visited the U.S. in June 2018. The delegation led by the Spanish royals were received by Trump at the White house on June 19.

????Trip of Their Majesties to the #USA from 14 to 19 June, they will be accompanied by the minister josepborrellF .
✅New Orleans (Louisiana)
✅San Antonio (Texas)
✅Washington D.C
On the 19th, they will be received at the WhiteHouse by POTUS and FLOTUS.

Spain has suffered migrant inflows particularly in areas where it shares a border fence with Morocco. The enclaves of Cueta and Melilla have seen young African migrants scale fences to reach Europe.

The European Union (EU) has continued its engagement with African governments with the aim of solving the migrant crisis from source.

Most young people are either fleeing political persecution or harsh economic conditions by attempting the deadly journey across the Sahara desert. Many have died on the desert and in the Mediterranean but it has not stopped others from attempting.

The Spanish minister, also a former President of the European Parliament, said despite pointing out that the plan was not feasible, Trump compared it to his famous U.S.-Mexico border wall.

“The border with the Sahara cannot be bigger than our border with Mexico,” Mr Borrell quoted Mr Trump as saying.

Available facts, however, shows that Trump was wrong. The US-Mexico border is approximately 2,000 miles (3,145 km) long whereas the Sahara desert stretches for 3,000 miles.