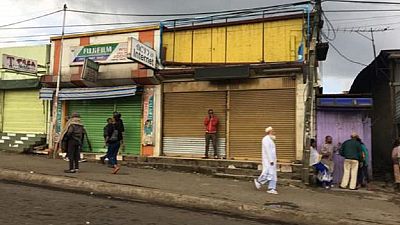 Business centers, cafes and shops in the Ethiopian capital Addis Ababa have slowed down considerably in the wake of clashes between Oromo youth and city dwellers.

Reports indicate that police fired tear gas on Friday to disperse clashes which have rendered the Addis Ababa commercial center a deserted space. Pockets of violence have also been reported in some areas.

“The violence occurred in Addis Ababa is still going on. Youth from the Oromia region are entering Addis through Addisu Gebaya. According to the source, the youth in Piassa are retaliating to the conflict.

“The federal and the city police are safeguarding Menilik II Square using anti-riot vehicles. The youths from the Oromia region holding the OLF flag and residents of holding the Ethiopian flag are rallying are now on the streets.

“The confrontation is over the hoisting of flags symbolizing the Oromo resistance movements and painting of road pavements, roads, fences and other places with similar colors of red and green with a yellow at the center by the youth from Oromia and between city dwellers who want to prevent them,” the Addis Zeybe newspaper reported via its Twitter handle.

The Oromo youth are preparing for the return this weekend of the Oromo Liberation Front, OLF – a one-time terrorist organization that was waging armed resistance against the country from neighbouring Eritrea.

Thousands of OLF fighters are expected to be led by their leader Dawud Ibsa to cross recently opened borders and return to Addis Ababa. An elaborate celebration is planned to take place.