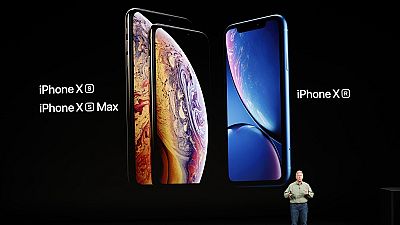 Apple Inc on Wednesday outdoored its latest installment of iPhones and range of watches as it looks to woo users to switch to more expensive devices.

According to industry experts, the main reason behind the latest devices is hinged on the stagnant global demand for smartphones.

The relatively small changes to its lineup, following last year’s overhauled iPhone X, were widely expected by investors, who sent the company’s shares down 1.5 percent.

They have finally added a larger-screen phone so that they can directly compete with the Galaxy Note9 products.

The XS Max is the largest iPhone to date and one of the biggest on the market. The company uses the ‘S’ suffix when it upgrades components but leaves the exterior of a phone largely the same. Last year’s iPhone X – pronounced “ten” – represented a major redesign.

Executives made the latest announcements at the Steve Jobs Theater at Apple’s new circular headquarters in Cupertino, California, named after the company’s co-founder who wowed the world with the first iPhone in 2007.

Whether you have an iPhone X or an iPhone 5s, you can update to #iOS12 on Monday, September 17.

See which other devices are compatible, right here. ??? pic.twitter.com/XIn251DXik

Apple, which is looking for ways to lessen reliance on phones for revenue, opened its event by announcing the new Apple Watch Series 4 range with edge-to-edge displays, like its latest phones, which are more than 30 percent bigger than displays on current models.

It is positioning the new watch as a more comprehensive health device, able to take an electrocardiogram to detect an irregular heartbeat and start an emergency call automatically if it detects a user falling down, potentially appealing to older customers.

The U.S. Food and Drug Administration said it worked with Apple to develop apps for the Apple Watch and has been taking steps to ease the regulatory pathway for companies seeking to create digital healthcare products.

here is the 40mm new Apple Watch on my tiny baby wrist pic.twitter.com/7Ijo1DHtOY

What the experts have said about the latest gadgets

“It is pretty consistent with past iPhone release days where we see short-term sell the news but things will probably get a lot better in the weeks and months ahead, particularly with a strong holiday sales season expected,” said Jake Dollarhide, chief executive of Longbow Asset Management.

“They have finally added a larger-screen phone so that they can directly compete with the Galaxy Note9 products,” Gartner analyst Annette Zimmermann said at the event at Apple’s Silicon Valley headquarters, referring to rival Samsung Electronics, which has led the trend toward big-screen phones.

“The larger screen will be very important in China to turn around the trend there, because they have lost some share in the last few years, partly because of screen size,” she added.

With two phone models starting at $999 or higher in the United States, Apple appears to be taking advantage of a strong U.S. economy, low unemployment, and rising household wealth.

The median U.S. household income rose for a third straight year in 2017 to the highest on record since 1967 by one measure, government data showed on Wednesday.

The strategy has been successful, helping Apple’s stock up more than 30 pct this year and making it the first publicly traded U.S. company to hit a market value of more than $1 trillion.

“This (new watches) is a pretty big deal,” said healthcare tech analyst Ross Muken at Evercore. “This update really establishes the company’s increasing efforts to push the watch as a serious medical device.

Apple seems to be diving into heart disease first, the most common cause of death around the world, making serious moves as a health company.”

Shares of fitness device rival Fitbit Inc fell about 3.7 percent after the Series 4 announcement. Shares of Garmin Ltd lost some earlier gains and were flat in midday New York trade.