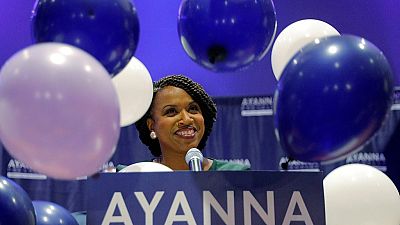 The state of Massachussets in the United States has just voted its first African American congresswoman in the person of Ayanna Pressley.

The 44-year-old Democrat won the party’s primaries beating an incumbent who had been in office for two decades, Mike Capuano. She will take her seat in November 2018 because she’s running unopposed.

She will become the first African American congresswoman to represent the state. In her victory speech she asked, are you ready to come to congress with me? Are you ready to bring change to Washington?

Ayanna Pressley is going to be a good congresswoman, and I will tell you that Massachussets will be well served.

The seventh congressional district which she represents is the only district in her state to have a majority non-white population.

Ayanna’s website describes herself as “an advocate, a policy-maker, an activist, and survivor.” Her election in 2009 to the Boston City Council marked the first time a woman of color was elected to the Council in its 100-year history.

Before becoming a councillor she worked for Senator John Kerry and Rep. Joseph Kennedy II – whose uncle, John F Kennedy held the seat Ms Pressley is set to win before he became president.

Her campaign focused on migrants’ rights and gun control. She continued in her speech: For the families and victims of senseless gun violence, change can’t wait. For our brothers and sisters behind the wall change can’t wait.

She also spoke about the plight of immigrants and women stressing that for all those marginalized groups, ‘change can’t wait.’

Her competitor also had nice words about her: “Ayanna Pressley is going to be a good congresswoman, and I will tell you that Massachussets will be well served.”

She’ll be the first African American congresswoman to represent Massachusetts after beating a 10-term incumbent and AyannaPressley can hardly believe it. pic.twitter.com/sKCcrNbC2d