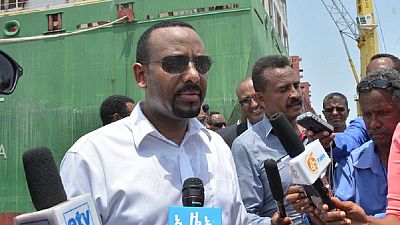 <p>Ethiopian Prime Minister Abiy Ahmed has lauded the Eritrean government for ongoing infrastructural works specifically on roads and its port services.</p> <p>Eritrea’s Information Minister disclosed that Abiy had a packed first day on his two-day visit. He visited Eritrean ports of Assab and Massawa, visited a 71 km highway to the Ethiopian border. A tour of the Massawa Free Trade Zone and talks with president Afwerki were also on his itinerary.</p> <p>“Progress in this component augurs well for efforts of both sides to ensure full implementation of all five pillars of the agreement,” he told reporters after visiting the Eritrean port of Massawa.</p> <p>The agreement in question is the July 9 peace deal he signed with Eritrea’s president Isaias Afwerki to end a state of war that existed between them for close to two decades.</p> <p>At the end of the Abiy’s historic visit to Asmara, the two leaders signed a five-point agreement, the summaries read as follows:</p> <ul> <li>State of war has come to an end;</li> <li>The 2 nations will forge close political, economic, social, cultural & security cooperation</li> <li>Trade, economic & diplomatic ties will resume</li> <li>The boundary decision will be implemented</li> <li>Both nations will work on regional peace</li> </ul> <p>He has since returned to the capital Asmara and is expected to enter a tripartite summit with his host and visiting president of Somalia. </p> <p>Abiy is expected to be part of the reopening of Ethiopia’s embassy in Asmara, state-run Fana broadcasting corporate reported.</p> <blockquote class="twitter-tweet" data-lang="en"><p lang="en" dir="ltr"><a href="https://twitter.com/hashtag/Ethiopia?src=hash&ref_src=twsrc%5Etfw">#Ethiopia</a> to officially reopen its embassy in <a href="https://twitter.com/hashtag/Eritrea?src=hash&ref_src=twsrc%5Etfw">#Eritrea</a> tomorrow <a href="https://t.co/TNEAi3iGCR">pic.twitter.com/TNEAi3iGCR</a></p>— <span class="caps">FANA</span> <span class="caps">BROADCASTING</span> C (@fanatelevision) <a href="https://twitter.com/fanatelevision/status/1037355572780097539?ref_src=twsrc%5Etfw">September 5, 2018</a></blockquote> <script async src="https://platform.twitter.com/widgets.js" charset="utf-8"></script>