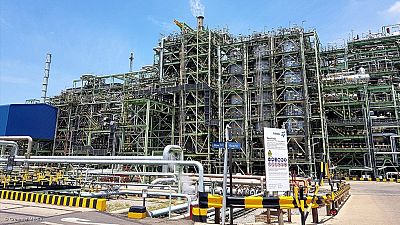 Under black economic empowerment rules, South African companies are required to meet quotas on black ownership, employment and procurement as part of a drive to reverse decades of exclusion under apartheid.

“We intend to switch off a different section of Sasol each day by means of well-laid and strategic plans,” the union said in a statement.

We have activated contingency measures to minimise potential disruption to our operations.

More than 80% of Solidarity’s members at Sasol in Secunda have voted for a strike against the company’s exclusion of white employees from a staff share scheme, according to the labour union. https://t.co/gBIB6UpBnN

Solidarity said it would embark on the strike action due to the company’s new staff share scheme excluding white employees. https://t.co/vvLVIiu4uN

Sasol, world leader in the technology that converts coal and gas to fuel, said last year it would raise its black ownership levels in Sasol South Africa to at least 25 percent in a 21 billion rand (US$1.5 billion) deal.

Solidarity which has 6,300 members at Sasol’s local operations, said it would embark on the strike action due to the company’s new staff share scheme excluding white employees which it previous called “blatant discrimination against loyal Sasol employees”.

Sasol which has around 26,000 employees at its local operations said received notification from the trade union Solidarity of its intent to strike on Monday and was open engagement with the union.
Advertisement

“We have activated contingency measures to minimise potential disruption to our operations,” Sasol said in an emailed response.

830members vote to strike because of Sasol race exclusion https://t.co/UMjD7tuoTV

Solidarity members to strike over exclusion of whites at Sasol https://t.co/inTN2VcloR