David Momoh is the outreach co-ordinator for Tacugama Sanctuary in Sierra Leone – a home for rescued chimpanzees.

Most of them are orphaned or separated from their family by wildlife traffickers, poachers or bushmeat traders across the country.

At Tacugama, the chimps are re-socialized and introduced to new families – a delicate process owing to a mix of their complex cognitive abilities and traumatic past.

“The chimpanzees we have here are coming from different parts of the country. It’s not like they are from the same family group. Mind you, chimpanzees live in a group of 30 and above and all chimpanzees coming from the east the west, the north and the south, we bring them here to the sanctuary and in trying to form them back in a group, it takes a long process,” said Momoh.

Researchers say chimpanzees are closely related to humans and share many behavioural, mental and social capabilities.

They are also classified as an endangered species because their populations are under threat from poaching and destruction of natural habitats.

The illicit wildlife trade in apes is worth millions of dollars and is fueled by demand from zoos, wildlife parks and wealthy urban residents wanting to keep wild animals as pets.

Baby chimps are especially at risk and according to World Wildlife Fund (WWF), suffer severe trauma during capture because their family members are often killed trying to protect them.

Tacugama is currently caring for 78 chimpanzees. It was started in 1995 and is the only such facility in Sierra Leone.

Work at the sanctuary continued despite a ten-year civil war that ended in 2002. But after the conflict, people flocked to the city causing rampant, unplanned construction and destruction of forests including the park surrounding Tacugama.

Tacugama now works with communities to create a better understanding of forest protection and wildlife conservation.

The sanctuary also runs an ecolodge where tourists can interact with, but not disturb the natural environment.

This has helped raise funds for conservation activities while raising awareness about their work, but Momoh says a lot still needs to be done to get communities and even authorities to appreciate the value of conservation.

“In doing exactly what Tacugama is doing, you can attract a lot of tourists coming in the country. You can also protect the animals and you can also contribute greatly in improving the ecosystem. So Tacugama has been a home, or one of the best tourist sites because of the fact that we blend tourism and ecosystem together leading to what we call now the eco-tourism and that is what we are now preaching out to people. We are now sending out the message to the country, to the president, to know,” said Momoh.

Tacugama was also affected by the ebola outbreak that killed 4,000 people in West Africa between 2014 and 2016.

Although none of the staff or animals was infected with the virus, the outbreak cut off vital funding and made the sanctuary a target of suspicion and stigma because locals believed Tacugama’s chimps were a source of infection.

Chimps and monkeys can carry the virus which is spread over long distances by bats that share trees with other primates. 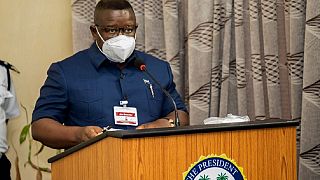