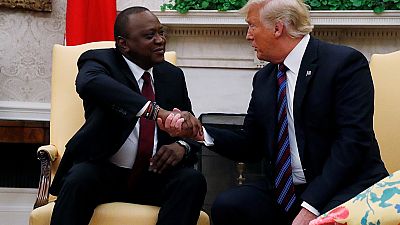 As Kenya’s digital savvy president, Uhuru Kenyatta held talks with the United States’ ‘Twitter’ president, Donald Trump at the White House on Monday, it was inevitable that audiences on the social networking site that both leaders love to use, would be engaged.

In Kenya, the meeting was discussed using the hashtag, #KenyaUSRelations, while both presidents and their first ladies also tweeted about their respective meetings.

Netizens also shared their thoughts on the several trade agreements signed, the photo ops including a seemingly awkward handshake between Trump and Kenyatta among other issues.

It was a pleasure having First Lady Margaret Kenyatta at the White House today. I enjoyed learning about Beyond Zero and discussing our shared concerns for the well-being of children.

What the presidents said

Coming on the day a Financial Times report claimed Trump had described Nigerian President Muhammadu Buhari as “lifeless” after their April meeting at the White House, the US president was quick to use Twitter to share his thoughts on the meeting with Kenyatta.

.FLOTUS Melania and I were honored to welcome the President of the Republic of Kenya, UKenyatta and Mrs. Margaret Kenyatta to the WhiteHouse today! pic.twitter.com/ZU5MovNKt8

Met US President realDonaldTrump at the WhiteHouse in Washington DC and invited the US to increase its trade and investments in Africa #KenyaUSrelations | POTUS FLOTUS FirstLadyKenya ForeignOfficeKE https://t.co/wblFXahZB0 pic.twitter.com/Y7Nvhelow4

U.S. First Lady Melania Trump said she was pleased to have hosted her Kenyan counterpart.

“It was a pleasure having First Lady Margaret Kenyatta at the White House today. I enjoyed learning about Beyond Zero and discussing our shared concerns for the well-being of children,” her tweet reads.

It was a pleasure having FirstLadyKenya at the WhiteHouse today. I enjoyed learning about BeyondZeroKenya & discussing our shared concerns for the well-being of children. #BeBest pic.twitter.com/MNrXaL7f16

The First Lady of Kenya, Margaret Kenyatta, who has retweeted Melania’s and Uhuru’s tweets, is yet to share her own takeaways from the meeting.

Kenyatta shared some of the significant issues discussed with Trump and business dlegations in the US including regional security, tourism and investment.

President realDonaldTrump and I also agreed to bolster the Kenya-US partnership in peace and security especially in the Horn of Africa region #KenyaUSrelations | POTUS FLOTUS FirstLadyKenya ForeignOfficeKE pic.twitter.com/q26bcgzJx0

We also discussed the direct flights from Nairobi to New York by KenyaAirways that are set to commence in October. The flights are set to boost tourism and trade for the mutual benefit of our two countries #KenyaUSrelations realDonaldTrump | POTUS FLOTUS FirstLadyKenya pic.twitter.com/ZR006wDoHR

African Growth and Opportunity Act (AGOA) is one of the main areas that is set to benefit from the direct flights between Nairobi and New York #KenyaUSrelations realDonaldTrump | POTUS FLOTUS FirstLadyKenya ForeignOfficeKE pic.twitter.com/Ztj5V0k2CE

And Kenyans responded by sharing their thoughts on these developments, but also highlighting nitty gritty details like the awkward hadshake between Trump and Kenyatta.

Is this a handshake or is somebody’s arm getting twisted here?#KenyaUSrelations pic.twitter.com/a7V4EDVZbe

As usual, Kenyan delegations can’t carry their own pen & paper to take notes in a meeting. Apparently they have SSD drives in their heads & identic memories.

Kwanza Monicah Juma & Rotich you’d think their foreheads are made of Intel i9 with 2TB capacity. ?

Hoping the ever dwindling Coffee and Tea sectors of our Country shall be part of President Kenyatta’s talk with US President Donald Trump at the Whitehouse#KenyaUSrelations pic.twitter.com/2eYx2yJXhI

This is where we get it all WRONG!

You don’t carry Politicians for such high-level bilateral engagements but Think tanks and Thought Leaders!#KenyaUSrelations https://t.co/8klOCjxmVY

There’s always a feeling of patriotism whenever I see UKenyatta representing Kenya to the outside world. Yes it's possible to build Kenya, it's possible to make Kenya soar! No matter the circumstances. This is home. #KenyaUSrelations pic.twitter.com/1zMUh7tNUD

“We’re here to pursue and strengthen our trade and investment ties,”