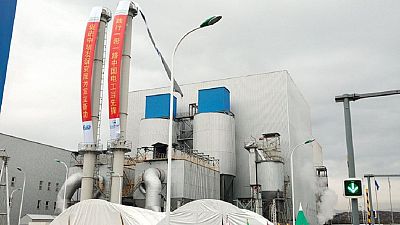 Ethiopia is home to the continent’s first waste-to-energy facility after a launch of the Reppie project over the weekend. President Mulatu Teshome and other high level government officials were present for the event.

The facility is built on the Koshe landfill site located on the outskirts of the capital Addis Ababa. It was launched in 2013 as a municipal solid waste incarceration plant.

It is supposed to take 1,400 tons of waste daily which figure comes up to about 80% of refuse generated by Addis Ababa. It will go on to supply the capital with 30% household electricity needs whiles conforming to global standards on air emissions.

In waste-to-energy incineration plants, rubbish is burned in a combustion chamber. The resulting heat is used to boil water until it turns to steam, which drives a turbine generator that produces electricity.

It was built by Cambridge Industries Limited (CIL), British & Island with Chinese partner contractors. It also involved Danish consultants Ramboll. It was fully funded by government with the overall cost put at 2.6 billion birr.

In 2017, the United Nations environment programme website reported that the project was to be launched in early 2018.

The Koshe dump site that metamorphosed to the historic reppie project

The Koshe dump site which had been transformed to the Reppie project served Addis Ababa for about 50 years made news headlines in March this year after a landslide at the premises killed about 114 people – residents and scavengers – according to government records.

In the wake of the incident, the government planned relocation for persons who lived on the large area said to be the size of 36 football pitches.

They moved to establish the plant with the broader objective of transforming the site and Addis Ababa’s approach to dealing with waste.

At the inauguration of Reppi Waste-to-Energy Project worth almost 3 Billion Birr. Evident is the influence of China. Hope knowledge transfer is part of such a mega deal and not a one way street. samza pic.twitter.com/wolsdGYEAJ