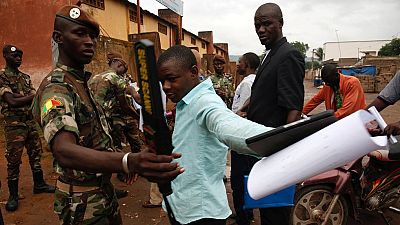 Malians on Sunday vote in a crucial election runoff that has been marred by allegations of fraud and a tense security situation in the vast west African nation.

The presidential runoff election is between, the outgoing president,Ibrahim Boubacar Keita and Soumaïla Cissé, the leader of the opposition.

The election is holding after the 24 candidates who competed for the top seat failed to get more than the required 50 percent of votes in the first round last month.

I want this government to leave because it is corrupt, it is a government that does not respect the will of the people.

Mali opposition supporters protested in the capital Bamako on Saturday urging voters to keep their eyes open to any attempt to steal the election on the eve of the presidential run off vote.

The first round was marred by accusations by opposition candidate Soumaila Cisse of ballot stuffing and parallel electoral lists. Cisse, who got through to the second round with just over 17 percent of the votes, is standing against President Ibrahim Boubacar Keita, who got 41 percent and is favourite to win.

“I want this government to leave because it is corrupt, it is a government that does not respect the will of the people. The people decided last Sunday (first round), the people voted against the outgoing president (Ibrahim Boubacar Keita) and they fiddled around with the constitutional court, so what we are asking for today is for the regime to get out,” said a protester, Ibrahim Drame.

The chaotic first round was a reminder that militants, some linked to al Qaeda and Islamic State, have regrouped since a French intervention in 2013 and are now expanding their influence across the desert north and into the fertile centre.