Eritrea: The story behind the emotional picture of a father and his twin daughters

Addisalem Hadgu was one of the most emotional Ethiopians that made the trip to Eritrea on Wednesday as a historic commercial flight was received at Asmara International airport for the first time. His story?

Two years after Ethiopia and Eritrea went to war in 1998, as the conflict raged on in trenches along the common border, Addisalem’s Eritrean wife, Nitslal Abraha, mysteriously disappeared along with their two daughters.

It was years of darkness. The separation and longing was unthinkable. Imagine someone who just won a lottery. That is now I feel now.

A neighbour approached him several days later and handed him a letter from Nitslal in which she said she had left for Eritrea with Azmera and Danayt, who were teenagers at the time.

The letter did not explain her reasons but Addisalem suspected that she, like millions of others on both sides of the conflict, had been swept by the patriotism and nationalism that engulfed both countries as bloodshed escalated.

“One day, we may meet,” the letter read.

For 18 years, they didn’t. There was no way to communicate – all transport links, phone and postal services had been severed since the start of the conflict.

But this month, a reunion became possible when the two governments – bitter enemies for nearly two decades despite agreeing a ceasefire back in 2000 – signed a peace deal that ended a generation of hostility in a matter of days.

After Eritrean President Isaias Afwerki and Ethiopian Prime Minister Abiy Ahmed shook hands, hugged and pledged to restore ties, Addisalem was among more than 400 passengers who flew to Asmara on Wednesday on the first direct flight between the Horn of Africa neighbours since 1998.

Addisalem’s desperate search for his family

Only months earlier, he had given up hope of a reunion. Over the years he had tried to reach out, including a request to the International Committee of the Red Cross to find his wife’s contacts, but to no avail.

He even considered travelling to Eritrea through Sudan with the help of people smugglers but was advised against the trip because of the exorbitant cost and risks to his safety.

“Everything discouraged you. I used to ask myself whether I was going to be deprived of seeing my family (again) because I did not have enough money,” said the 58-year-old Addisalem.

While his friends tracked down his eldest daughter Azmera through Facebook and he exchanged messages over the last two years, Addisalem often found himself distraught over his inability to speak to her in person.

“I collapsed and blanked one day,” he told Reuters a day after his arrival in Asmara. “I could not control myself. I stopped speaking to her as I just could not take it any more.”

As the pledge to restore Ethiopian-Eritrean ties gathered pace and the possibility of a rapprochement grew over the months of June and July, he contacted her again.

They agreed to meet at the home of a relative.

On Thursday, outside a small brick house in Asmara’s Geza Banda ‘Tilyan district, Addisalem was received to ululations and cheers. Husband, wife and daughters embraced for the first time in 18 years. Initially, it was only small talk.

“I came despite a toothache,” he told her.

“I am a bit ill as well,” Nitslal responded. 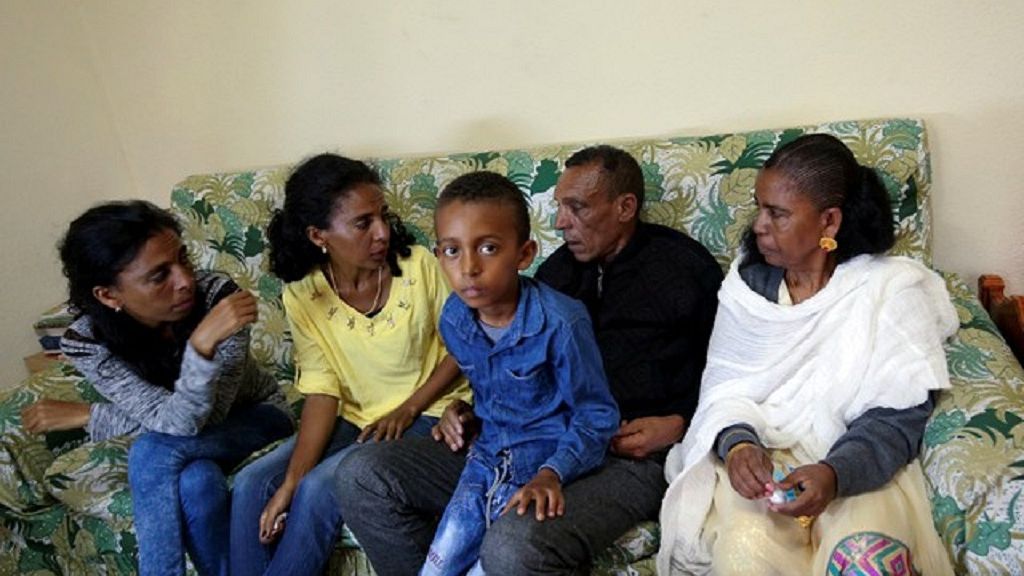 He then broke down in tears as his daughters hugged him.

“It was years of darkness. The separation and longing was unthinkable. Imagine someone who just won a lottery. That is now I feel now,” Addisalem said, lamenting the long and bitter price paid by ordinary people on both sides of the conflict.

“This was unnecessary. I lost my family because of it. We all fought in it one way or another.”

His other daughter, Danayt, could scarcely believe she was seeing her father again.

“He might be sitting next to me now but I am still horrified that I might lose him again,” she said.

Forget the past, enjoy a future with family

Overcome by emotion, Addisalem sidestepped any questions about the past, including why his wife had left with their two daughters, although their son had remained with him.

With the thaw between Ethiopia and Eritrea still in its infancy, it was unclear where the family would end up living.

Addisalem just looked to the future. “I do not care now,” he said. “I have turned my back on the past and will enjoy the future with my daughters.”