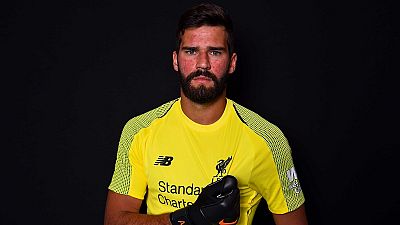 Liverpool have completed yet another lucrative transfer from Italian club, AS Roma, signing Brazilian Alisson on Thursday for a world-record fee for a goalkeeper.

The Serie A side said Liverpool had agreed a deal worth up to $84 million for the 25-year-old, eclipsing the previous record of $61million paid by Juventus for Gianluigi Buffon in 2001.

Arriving at Melwood in style. ?? pic.twitter.com/GSMIGBNoQ1

Alisson made 37 league appearances for Roma last season and helped the club reach the Champions League semi-finals, where they were knocked out by Liverpool.

He started all five games for Brazil at the World Cup in Russia where they bowed out in a quarter-final defeat by Belgium.

Liverpool will be hoping that Alisson is as successful as their last recruit from AS Roma, Mohamed Salah. Salah who scored 44 goals for Liverpool last season, earning all awards including the Premier League’s top scorer and best player, spent two seasons at AS Roma, 34 goals in 83 appearances in all competitions for the club.

Liverpool brought Salah to Anfield in June last year for $49 million, and the Egyptian star is said to have sent a text message to Allison during the negotiations asking, ‘What are you waiting for?’