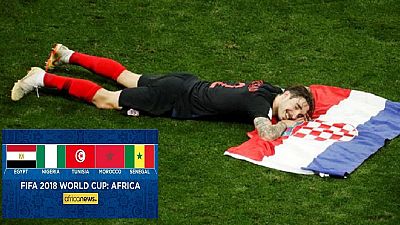 It was no surprise that Croatia danced on the pitch in celebration with fans and family long after beating England in the semi-finals of the World Cup on Wednesday night.

The ecstasy of taking a tiny nation to the final of the World Cup for the first time needed to be worked through with the people that provided the players with support and inspiration.

On Sunday, the Croats will play the biggest match of their lives against a France side bursting with youth and vigour that has had a day more rest and played the equivalent of a match fewer over the knockout rounds.

We were like lions out there tonight and we will be the same in the final.

While going to 30 minutes of extra time in all three of their sudden death matches, not to mention emotional energy-sapping penalty shootouts in two of them has proved beyond doubt Croatia’s resilience, it has also taken its toll.

“Nobody wanted to give in when I was preparing the first eleven, nobody wanted to say I was not ready in extra time, no one wanted to be subbed and this shows character and what makes me proud. Nobody gave up.”

Mario Mandzukic typified their efforts, running himself into the ground in the lone striker role but taking his chance to score the winner clinically when it presented itself nearly 20 minutes into extra time.

Even before his goal, Mandzukic had spent some minutes on the turf after a collision with England goalkeeper Jordan Pickford and an agonising attack of cramp left him once again prone on the pitch in the wake of his decisive strike.

The Juventus striker finally limped off utterly exhausted six minutes from time but promised unstinting effort on Sunday to bring the World Cup back to the nation of some four million people.

“We were like lions out there tonight and we will be the same in the final,” he said.

That the nation will be backing them to gain revenge for the World Cup semi-final loss to France in 1998 is without question, as is the fact that there will once again be an army of fans decked out in red and white checks at the Luzhniki Stadium.

“We were louder, they were carrying us, they picked us up when we were not in control of the game,” Dalic said of the supporters.

“For Croatian football and Croatia as a country, this is history being written. I don’t know of a smaller country in a World Cup final.

“But we have our hearts, our pride and our players and that is what is really important to us.”