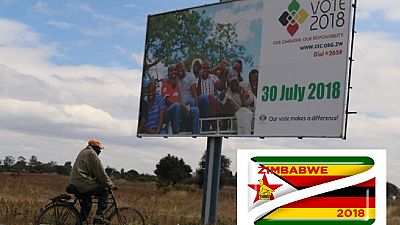 Zimbabwe will hold its first election since a November army coup ended Robert Mugabe’s near four-decades rule and paved the way for his longtime ally Emmerson Mnangagwa to become president.

The July 30 General Election will pit president Mnangagwa of the ruling ZANU-PF party against the young and charismatic Nelson Chamisa of the opposition Movement for Democratic Change Alliance, challenging for the presidency.

While Zimbabwe lacks a reliable polling system, an unofficial survey released last month in its second city Bulawayo by the Mass Public Opinion Institute put Mnangagwa on 42 percent and Chamisa on 31 percent, while 25 percent declined to disclose a preference.

Since taking office in November last year, Mnangagwa has sought to stimulate the economy, attract foreign investment and restore relations with the international community after 37 years of Mugabe’s rule took the nation to the brink of a ‘failed state’.

With his now famous ‘Zimbabwe is open for business’ mantra, Mnangagwa has travelled the world meeting global business and political leaders, in addition to Zimbabweans in the diaspora, assuring them of his commitment to break with the past and deliver economic and political reforms.

Having embarked on a crackdown against corruption that included a three month amnesty to return looted state money and arrests of high profile figures on allegations of corruption, Mnangagwa is hoping that a strong mandate gained from convincingly winning an election would legitimise his presidency and provide momentum to deliver real change.

Mnangagwa however has an uphill task of dissociating himself from the failures of the Mugabe government and the 37 years of the ruling ZANU-PF party that he leads.

While Robert Mugabe will not be on the presidential ballot, his influence will loom large on the election as he has publicly declared his dissatisfaction with the prevailing state of affairs in the government.

In power since Zimbabwe’s independence in 1980, Robert Mugabe was forced to resign last November in a coup by the army and his party, Zanu-PF.

Having described the November change of government as illegitimate and undemocratic, Mugabe is said to be backing an opposition political party, New Patriotic Front (NFP) which is led by Ambrose Mutinhiri, a veteran of Zimbabwe’s 1970s independence war.

“I never thought he whom I had nurtured and brought into government and whose life I worked so hard in prison to save as he was threatened with hanging, that one day he would be the man who would turn against me,” Mugabe said of Mnangagwa in an interview with South African state broadcaster SABC from Harare.

Chamisa, the 40-year-old leader of the opposition Movement for Democratic Change (MDC), says the president is equally to blame for the country’s economic troubles, since he served in each of Mugabe’s governments since independence in 1980.

Can the opposition unseat ZANU-PF?

Mnangagwa is however not facing a united opposition front, after Joice Mujuru, a Mugabe deputy for 10 years before she was ousted from the ruling party in 2014, and Thokozani Khupe, who leads a splinter MDC faction after falling out with Chamisa, also entered the presidential race.

Chamisa who was one of the vice presidents appointed by Tsvangirai, eventually won the disputed race, but Khupe who had been elected as Tsvangirai’s deputy by the party’s congress refused to reconcile with Chamisa.

Indeed, attempts by Chamisa to have Mujuru and Khupe join the MDC and its alliance of smaller parties have so far failed.

“It is unfortunate that we are in a situation where other parties have not seen the light to say that it is important for opposition forces to unite and rally behind one candidate,” said Jameson Timba, who presented Chamisa’s nomination papers.

If no single presidential candidate wins an absolute majority next month, a run-off is scheduled for September.

Army’s role in the election

The role of the army, which toppled Mugabe in November last year, and whose former commander, Constantino Chiwenga is now vice president has been fronted as an issue by the opposition.

Mnangagwa enjoys the backing of the army, which analysts say remains averse to any leader who lacks a pedigree from the liberation war against white rule.

In May, the government was forced to distance itself from remarks by Deputy Minister of Finance Terence Mukupe who said the army wouldn’t allow the opposition to rule if it wins an election this year.

The opposition has demanded that soldiers should stay away from the electoral commission and electoral campaign meetings.

The security situation in the country was heightened in June after Mnangagwa survived an ‘assassination’ attempt at a rally held in Bulawayo, an opposition stronghold.

The president’s securuity has since been overhauled, even though the government has been quick to allay fears by the opposition that the attack could be used to clampdown on opponents of the president.

The world is watching

For the first time since 2002, foreign observers are monitoring the vote. If they give it a seal of approval it will allow Harare to repair ties with the International Monetary Fund and World Bank to access the large-scale funding it needs to rebuild the economy.

While the run-up to the vote has been largely peaceful compared with past elections, a dispute between the main opposition Movement for Democratic Change (MDC) and the Zimbabwe Electoral Commission (ZEC) over ballots threatens to mar its credibility.

The EU observer mission last week urged urged ZEC to be more open about the printing and storage of ballot papers to enhance the credibility of a July 30 presidential and parliamentary vote.