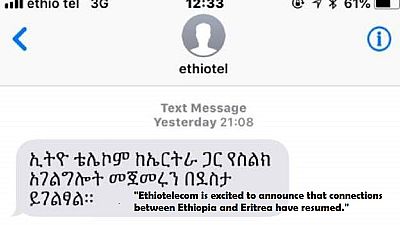 In a text message to its 57 million plus customers, Ethio Telecom said: ““Ethiopia Telecoms announces with happiness the restoration of telephone service to Eritrea.”

The operator’s move ends two decades of severed service which came on the heels of a peace deal signed by leaders of the two formerly hostile but now neighbourly countries.

The last time subscribers were able to place calls to Eritrea was in 1998. Many people expressed excitement at the possibility after years.

Prime Minister Abiy Ahmed met with Eritrean president Isaias Afwerki in Asmara with the two declaring an end to their twenty year old war and restoring all ties between them – economic, diplomatic, security etc.

As part of the process, Ethiopian Airlines has announced that it will resume daily flights to the Eritrean capital, Asmara.