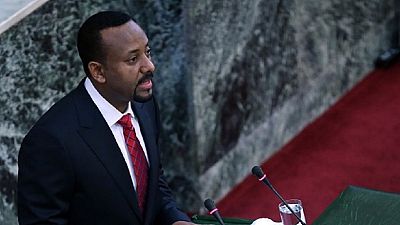 Ethiopia has capped an extraordinary week in which its new prime minister, Abiy Ahmed, pushed ahead with bold reforms undeterred by a grenade attack that sparked fears of backlash by hardliners.

Just three days after a blast killed two people at a rally Abiy had addressed in the heart of the capital, the prime minister greeted a delegation from Eritrea, a neighbour with whom Ethiopia has been at war — both hot and cold — for decades.

Abiy took office in April after years of anti-government unrest and quickly announced unprecedented changes including liberalising parts of the state-controlled economy and releasing jailed dissidents.

Dozens of suspects were quickly arrested and the administration warned of "conspiracies... to deter ongoing reforms", but Abiy quickly moved on, hosting an Eritrean delegation in the days that followed

But perhaps his biggest policy shift so far is towards Eritrea, with Abiy promising to cede territory occupied since a brutal two-year-long border war ended in 2000.

Last Saturday’s blast triggered panic at the rally and a stampede in which 150 were injured, raising fears of a backlash by party and security hardliners opposed to Abiy’s reforms.

“Definitely, it’s true that there are many groups, individuals and organisations that are not happy with the kind of reform that he’s undertaking,” said Ethiopian political analyst Hallelujah Lulie.

But in the week since, Abiy has barely missed a step — and analysts say his momentum has not been lost.

“It was an attack, not only on the prime minister himself, but on the freedom of the people,” said Seyoum Teshome, a university professor who organised the rally. “He’s going to get more support from the people.”

Dozens of suspects were quickly arrested and the administration warned of “conspiracies… to deter ongoing reforms”, but Abiy quickly moved on, hosting an Eritrean delegation in the days that followed.

Ethiopia had seethed with anger before the 42-year-old former army officer and cabinet minister was appointed by the ruling Ethiopian People’s Revolutionary Democratic Front (EPRDF), becoming the first leader in modern times from the country’s largest ethnicity the Oromo.

Violent anti-government protests led by the Oromos — and the second-largest ethnicity, the Amhara — began in late 2015. Hundreds died but even a 10-month state of emergency could not quell the anger.

One of Abiy’s first acts was to tour the country’s restive regions to raise his profile and curry support, and then lift a second emergency decree issued after the February resignation of his predecessor, Hailemariam Desalegn.

The rally in Addis Ababa’s central Meskel Square was his first big public appearance in the capital and, dressed casually in a t-shirt and porkpie hat, he spoke of peace and unity to a crowd of hundreds of thousands before making a hasty exit after the grenade blast.

On Tuesday, he was relaxed and smiling as he strode down a red carpet to greet two high-ranking Eritrean officials who travelled from their capital Asmara in the first official visit to Ethiopia since the border war.

A band played, dancers performed and the visitors were wreathed with garlands and greeted by Ethiopia’s cultural and sporting elite.

“Great statesmen in Eritrea and Ethiopia have summoned the courage and vision to blaze the trail and build the pillars for enduring regional peace anchored on law and justice,” Eritrea’s information minister, Yemane Gebremeskel, said on Twitter after the men arrived.

Unthinkable just months ago, the rapprochement with Eritrea was announced by Abiy earlier in June at the same time as the economic liberalisation.

While the liberalisation is expected to unfold over the coming years, the Eritrean reconciliation is moving far faster: Ethiopia’s government says Abiy will soon meet Eritrea’s president, Isaias Afwerki, in person.

“We will celebrate the new year in Asmara and Addis Ababa, so you need to start preparation,” Abiy told guests at a dinner for the visiting Eritreans, in a flash of diplomatic bonhomie. The new year, in the Ethiopian orthodox calendar, falls this year on September 11.

Yet as if to underline the breadth of depth of the problems Abiy faces on the domestic front, the United Nations sounded the alarm this week as ethnic violence flared in the nation’s contested peripheries.

After overthrowing the vicious communist Derg junta in 1991, the EPRDF carved the country into an ethnic federation intended to give Ethiopia’s many peoples a degree of self-rule.

But the borders between these regions have recently seen ethnic clashes that have strained aid agencies, already struggling with Ethiopia’s perennial droughts and large refugee population.

On Wednesday at least 10 people were killed in the western Benishangul-Gumuz Region in the latest clashes.

Hallelujah drew a line between this fighting and the security forces’ heavy-handed response to the years of anti-government unrest, arguing that Abiy’s reforms could restore confidence and trust in the state, and its ability to resolve disputes without violence.

“I believe, if he continues with the kind of pace and the kind of rhetoric he’s been doing in the past three months, I think they will subside,” he said.