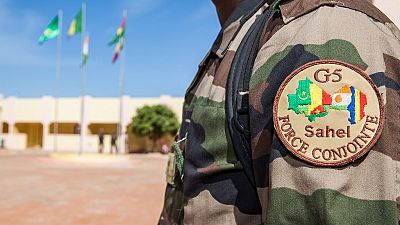 A suicide bomber in a vehicle painted in UN colours attacked the Malian headquarters of an international anti-terror task force, the G5 Sahel, on Friday, killing two soldiers and a civilian, according to a security source and a local leader.

The building’s entrance wall was destroyed, with the force of the blast throwing the vehicle inside it, according to witnesses and pictures of the scene.

The Al-Qaeda-linked Support Group for Islam and Muslims, the main jihadist alliance in Africa’s Sahel region, claimed the attack in a telephone call to the Mauritanian news agency Al-Akhbar.

It was the first attack on the headquarters of the five-nation force, set up with the backing of France in 2017 to roll back jihadist insurgents and criminal groups in the vast, unstable Sahel region.

“Shortly after Friday prayers, a suicide bomber in a vehicle painted with UN colours blew up at the entrance to the G5 base in Sevare. It was a huge blast,” a military source in the G5 Sahel force told AFP.

Two soldiers from the force and a civilian were killed, as well as two attackers, according to a source within the force and the governor of Mopti, the regional capital.

The Malian government later said that the two soldiers killed were members of its armed forces.

A previous toll of six people killed was revised down.

Governor Sidi Alassane Toure said there had been “confusion” in the morgue.

“We have arrested four suspects,” he told AFP, adding that search operations would take all night.

Guterres, who visited the Sevare headquarters last month, highlighted security shortcomings on several of the force’s sites in Mali in a report published in May.

“Poor conditions on and around the site represent an important security threat, and are delaying the deployment of the remaining soldiers,” the report said.

Residents in Sevare, 600 kilometres (375 miles) northeast of the capital Bamako, hid inside their homes during Friday’s attack, according to Bouba Bathily, a trader who sheltered from the gunfire in his house.

A local orange seller, Haoussa Haidara, said “there was a huge blast” followed by shooting that lasted more than an hour.

The attack came three days before a meeting in the Mauritanian capital of Nouakchott between French President Emmanuel Macron and the heads of the G5 Sahel states to discuss progress made by the force.

The G5 Sahel aims to have a total of 5,000 troops from five nations — Burkina Faso, Chad, Mali, Mauritania and Niger, but has faced funding problems.

It operates alongside France’s 4,000 troops in the troubled “tri-border” area where Mali, Niger and Burkina Faso meet, and alongside the UN’s 12,000-strong MINUSMA peacekeeping operation in Mali.

“Solidarity with our African partners with whom we will continue the fight against terrorism,” she said.

The G5 Sahel was scheduled to be fully mobilised by mid-2018, but its deployment has faced delays, equipment worries and accusations of human rights abuses.

On Tuesday, the UN said Malian soldiers within the force had “summarily” executed 12 civilians in a market in central Mali in May in retaliation for the death of a soldier.

Malian Prime Minister Soumeylou Boubeye Maiga said that the government had “taken the necessary measures” after the bloodshed, which he condemned.

France intervened militarily in Mali in 2013 to help government forces drive Al-Qaeda-linked jihadists out of the north.

But large tracts of the country remain lawless despite a peace accord signed with ethnic Tuareg leaders in mid-2015 aimed at isolating the jihadists. The violence has also spilled over into both Burkina Faso and Niger.

Earlier Friday, French military headquarters said troops from its Barkhane mission in Mali had killed or captured 15 jihadists on June 22 in a joint operation with local forces.

The clash took place in a woodland area of the Inabelbel region, southeast of Timbuktu, it said in a statement.

A group of about 20 jihadists were attacked using helicopters and jet fighter support after they were spotted by Malian commandos, it said.