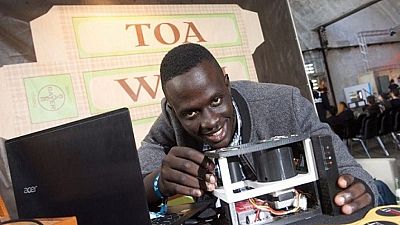 Ugandan software engineer, Brian Gitta recently won the Royal Academy of Engineering’s, Africa Prize for developing a test kit that can detect malaria using a beam of light to test a patient’s finger.

The test kit called Matibabu or “treatment” in Swahili is connected to a phone or laptop where it relays results.

A red beam on the kit detects changes in shape, colour and concentration of red blood cells, affected by the malaria parasite.

One of the biggest competitive advantage we have for the ultimate is being non-invasive which is, you reduce rate of re-infection due to other diseases in the Lab setting. The other biggest advantage we have is time. The RDT (Rapid Diagnostic Test) takes about 15 minutes from the time blood is drawn and then put on the

Matibabu wants to replace traditional methods of checking for malaria through blood tests and promises to give a quick diagnosis.

The 24-year-old is the youngest and first Ugandan winner of the prize of 25,000 pounds.

“The patient holds still and inserts their finger into this device and then the device is started with either the phone or the laptop that is connected to the device. Holding still for two minutes, the patient leaves their finger into the curvature for the device and after the sampling the results are sent to the laptop or to the phone to show whether you have malaria or not,” said Gitta.

The engineer also hopes the kit will help reduce unpleasant tests and costs for patients as well as discourage people from self-medicating whenever they have symptoms of fever.

How it all started

Gitta worked with a team to develop the device over four years after skipping classes at various points because of having malaria.

They started working on the project when they were university students studying computer science.

They came up with five different prototypes during the research period.

Malaria, a mosquito-borne parasitic disease, kills more than 600,000 people a year, mainly babies in the poorest parts of sub-Saharan Africa.

Uganda has one of the highest rates of malaria in Africa, recording about 16 million cases a year, according to the country’s Ministry of Health.

“One of the biggest competitive advantage we have for the ultimate is being non-invasive which is, you reduce rate of re-infection due to other diseases in the Lab setting. The other biggest advantage we have is time. The RDT (Rapid Diagnostic Test) takes about 15 minutes from the time blood is drawn and then put on the strip and you wait for the results to come out. The microscope on the other hand takes about 30 minutes to get a conclusive result and the Matibabu kit takes two minutes to have those results visible to you. So that, the turn over time for the patients in the queues is higher and improving the rate at which the doctors deliver the medication and everything,” said Gitta.

Doctor Joseph Okia, a physician at Nakasero Hospital says the innovation could be a game-changer that helps reduce costs in managing hospital waste like used needles, but warns that the device would need to give very accurate test results to be effective.

“When we look at medical tests, we have something called sensitivity and specificity. Sensitivity means how likely is this test able to detect someone with malaria. Usually we want to aim for something above 95 percent; the developers have talked about 80 percent. The second question is specificity, how specific is this test for malaria, what if I have another infection, will this test also say positive if something else happens in my blood cells? So those are the two questions I think we want to know about these tests,” said Okia.

“There is possibility of scaling beyond just malaria, I mean, to go into things like sickle-cells anaemia and other deficiencies that affect the red blood cells. So the whole objective is us producing solutions that help communities or people in the communities access the healthcare as fast as possible,” said Gitta.

The award will provide funding, training and mentoring for the project as the team continues to develop the test kit further. Various researchers and organisations have also offered to support the project.