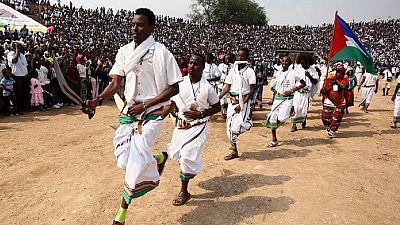 Ethiopia’s prime minister, Abiy Ahmed has pledged to develop Afar region as a tourist destination, citing its rich history and abundance of natural resources as factors that would be exploited to fulfil this mission.

Abiy, who was holding discussions with representatives of the community drawn from the regional state, said Afar is the home of Lucy, source of the human race and the ‘very core of Ethiopianism’.

HE PM Abiy Ahmed is in Semera, Afar meeting local residents. “Afar is home of Lucy, source of the human race, the very core of Ethiopianism—even an Afar Camel recognizes the Ethiopian flag,” PM said. In Semera, construction of new industrial park that creates 20k jobs will start. pic.twitter.com/tGuDKCAHve

Lucy is a 3.2 million-year-old member of Australopithecus afarensis and the most complete skeleton of an early human ancestor ever discovered. Lucy was declared ‘the grandmother of humanity’ after her discovery in Ethiopia’s Afar region.

The 41 year old reformist leader also highlighted the strategic importance location of the state that is nearer to the Red Sea, a location he says enabled the people in the state to defend their country from foreign invaders.

Abiy, who has the uphill task of implementing political and economic reforms in Ethiopia laid for the construction of a new industrial park in Semera, the regional state’s capital, which will create 20,000 jobs.

The discussion, which was similar to several Abiy has been holding across the country since he took office in April focused on problems of good governance, alleviation of unemployment and the need for a united Ethiopia.

Abiy pledged to work with the regional state to effectively exploit and use the potash and livestock resources available in the state to improve the livelihoods of the people.

The Afar province which borders Eritrea has in the past been posed an existential threat to the government in Addis Ababa. The Afar Revolutionary Democratic Unity Front (ARDUF) has fought a low-key insurgency to carve out a homeland from Ethiopia, Eritrea and Djibouti.