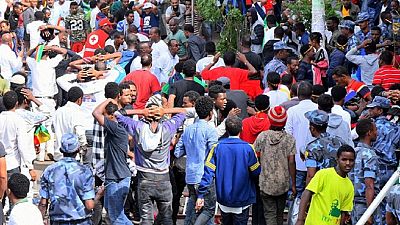 The forces behind Saturday’s grenade attack at a rally in Ethiopia attended by Prime Minister Abiy Ahmed could strike again, the government said on Wednesday, urging the public to remain vigilant at public gatherings.

Thirty arrests have been made since the incident on the weekend, which killed two people and injured scores more. However, it is not clear who planned the attack or what the motive might have been.

“There is suspicion that these forces whose bid was foiled may strike again in different parts of the country,” said the head of Ethiopia’s Government Communication Affairs Office, Ahmed Shide.

There is suspicion that these forces whose bid was foiled may strike again in different parts of the country.

The attack came at a rally in support of Abiy’s push for radical reforms. Since taking office in April, he has tried to open Ethiopia up to the outside world, after decades of security-obsessed isolation.

That includes a surprise push to end his country’s conflict with Eritrea, one of Africa’s most intractable stand-offs .

The government’s warning also came amid several bouts of violence that have taken place in remote areas of the country.

In the western Benishangul-Gumuz region, residents in its capital Assosa told Reuters that sporadic gunfire was heard on Wednesday and that shops and schools remain closed.

One person has so far died in violence that erupted on Monday, while 30 more people suspected of instigating the violence were in custody according to the state-owned Ethiopian Broadcasting Corporation. The cause of the unrest is not clear.

On Tuesday, Abiy appointed a new police commissioner and a deputy in Addis Ababa, the state-affiliated Fana agency said, the latter replacing an official who is in custody on charges relating to a security lapse over Saturday’s attack.