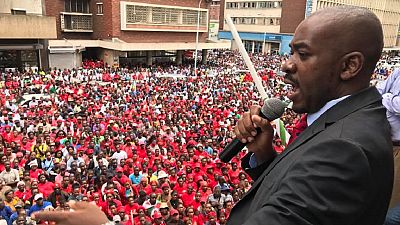 Zimbabwe’s main opposition party promised on Thursday to revive the economy if it wins an election in July by cutting taxes, abolishing a quasi-currency “bond note”, joining a regional monetary union and seeking debt relief.

The country holds its first vote since Robert Mugabe’s downfall in November after nearly 40 years in power. New President Emmerson Mnangagwa is favourite to win against Nelson Chamisa, leader of the Movement for Democratic Change.

Zimbabwe was largely cut off from foreign lending for two decades and a successful election could help unlock investment.

That can only be done by the new and not the old that is masquerading as the new.

Mnangagwa is 75, Chamisa is 40 and the contest is seen as a fight between the old guard of the 1970s independence war and a younger generation.

Chamisa, who has been joined by several smaller parties, said Zimbabwe would seek cancellation of its more than $10 billion foreign debt to allow it to access new funding.

To end cash shortages that have seen banks limit withdrawals to as little as $20, the MDC would quickly scrap the bond note and join the Common Monetary Area led by South Africa, he said.

Other reforms would include cutting the budget deficit, accelerating reforms of state-owned firms and introducing a flat corporate tax rate of 15 percent for companies to allow businesses to re-invest money in production.

“That can only be done by the new and not the old that is masquerading as the new,” he said, referring to Mnangagwa, while launching his election manifesto in Harare.

Chamisa, however, faces an uphill battle against Mnangagwa, who has the advantage of incumbency and a well resourced campaign while the opposition is struggling for funding.

The death of MDC founding leader Morgan Tsvangirai from cancer in February also left the party divided as factions fought over its control. A smaller MDC camp will separately contest the election, likely splitting the vote.