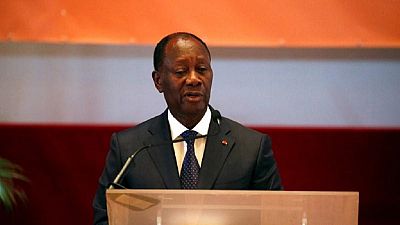 Ivory Coast President Alassane Ouattara said he is free to stand for a third term in the 2020 presidential election under the country’s new constitution, according to an interview in this week’s edition of French magazine Jeune Afrique.

This is the first time Ouattara, who was first elected in a 2010 election that sparked a brief civil war, has made the claim, which will anger his political foes.

The new constitution authorizes me to serve two terms starting in 2020.

“I will only make a definitive decision then, based on the situation in Ivory Coast. Stability and peace come before all else, including my principles,” he said.

A government spokesman could not be immediately reached for comment.

Ivorian voters overwhelmingly approved the new constitution in a November 2016 vote that was boycotted by Ouattara’s main opposition.

It scrapped a provision in the previous constitution requiring both of a presidential candidates’ parents be natural-born Ivorian citizens, which had been used to disqualify Ouattara from a 2000 election and helped fuel regional tensions that saw the country split into two from 2002-11.

Ouattara has family ties that straddle the borders with Burkina Faso and Mali.

Prospective successors have been jockeying for political position ahead of the 2020 election, threatening to break apart Ouattara’s governing coalition and raising fears the country could experience renewed civil conflict.

The presidents of other African countries, including Rwanda and Congo Republic, have altered their constitutions in recent years to get around term limits, but Ouattara had previously promised to step down in 2020.

Under Ouattara, Ivory Coast, the world’s top cocoa producer, has routinely recorded some of the highest economic growth rates in Africa on the back of record cocoa production and investments in infrastructure and services.

But historical divisions based on ethnicity, land and religion have not healed and a string of army mutinies and public sector strikes have taken some of the shine off the country’s economic successes.