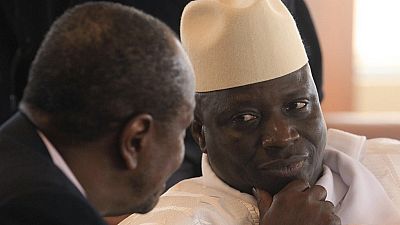 Exiled Gambian president, Yahya Jammeh, his family and close allies have formally been invited by a Commission of Inquiry looking into his assets.

President Adama Barrow in July 2017 inaugurated the 3-member Janneh commission of inquiry to look into the assets of Jammeh. Barrow said at the time that the move was “another step in our change agenda for good governance.”

It is not known to who in particular Jammeh’s invitation was addressed because he is currently resident outside the country.

According to the local Point newspaper, the commission’s notice disclosed that it will from the June 25, 2018, begin to receive evidence from ex-president Yahya Jammeh, his family members and named close associates.

It added that all persons who considered themselves adversely affected by the evidence so far led before the commission could also approach them to give evidence.

Such persons are required to submit to the secretary of the commission, a written request setting out the particular evidence they need to speak to and witnesses they wish to be recalled for cross examination. They are also to submit any other evidence in respect of the hearings.

The notice said evidence must be submitted latest by 15th of June, 2018. It stressed that if a request is not acknowledged with regard to any person at that date, the commission would assume that such person (s) do not intend to present evidence or cross examine in the inquiry.

Jammeh who is currently exiled in Equatorial Guinea, his family or his party have not acknowledged receipt of the notice nor have they reacted in any way to the latest development. The commission has heard largely about financial misappropriation by the former leader.