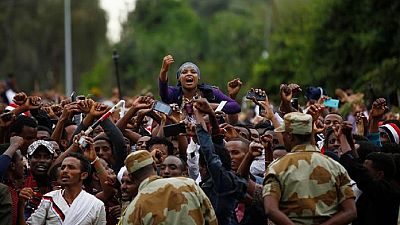 Ethiopia’s attorney general has asked the country’s High Court to drop charges against a prominent journalist and two foreign based media organisations.

Criminal charges against Berhanu Nega, leader of Ginbot 7 (G7), as well as Jawar Mohammed, executive director of Oromo Media Network (OMN) and a prominent Oromo activist will be duly dropped.

The two were accused along with prominent Oromo opposition politician, Dr. Merera Gudina of leading the 2015 anti-government protests.

The attorney general’s office has also said charges against two foreign based media organizations, OMN and ESAT were dropped. The institutions had been charged under Ethiopia’s anti-terrorism laws, accused of fuelling the protests by serving as a communication tool for terrorist organizations such as Oromo Liberation Front (OLF) and Patriotic G7, both outlawed under Ethiopian laws.

The actions of the attorney general are part of wider reforms by Ethiopia’s ruling party that have included release of political prisoners, change of guard at the country’s highest political office and reaching out to opposition political parties.

Up to 14 political parties including the ruling Ethiopian People’s Revolutionary Democratic Front (EPRDF) coalition, are scheduled to meet on Wednesday, as part of the efforts to widen the political space in the country.

Fana BC reported that the parties have so far agreed to amend some articles of the anti-terrorism law and discuss electoral reforms.

The new prime minister, Abiy Ahmed recently welcomed back representatives of the exiled opposition party, Oromo Democratic Front (ODF), after they agreed to return home to participate in shaping the country’s political reforms.