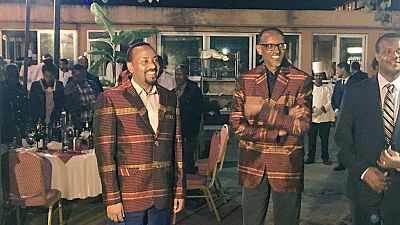 Rwandan president Paul Kagame is in Ethiopia for a three-day official visit which started on Friday. He arrived in Addis Ababa on Thursday evening and was received by Prime Minister Abiy Ahmed at the airport.

Day one of his visit was packed with bilateral meetings, a visit to the Hawassa industrial park and a banquet in his honour in the evening.

The Ministry of Foreign Affairs shared pictures of the welcoming ceremony that included the presentation of a bouquet of flowers and a national guard of honour. Kagame and his host held bilateral talks at the national palace.

President Kagame is a freedom fighter, great gift for the people of Rwanda and for the continent. After fighting for freedom it is difficult to establish institutions, but when you go to Rwanda you can see how this leader has changed the country.

Update: PM #AbiyAhmed welcomed President Paul Kagame of #Rwanda at the National Palace earlier today. The ceremony in honor of President Kagame “was officiated with the presentation of a bouquet of flowers, the salutations of the National Guard of Honor” according to MoFA. pic.twitter.com/n75YKZ5o7x

During the visit to the Hawassa Indudtrial Park located about 275km from the capital Addis Ababa, the two leaders interfaced with various companies which started production in the park.

They were briefed on Ethiopia’s industrialization move and of the Hawassa industrial park in particular.

Later in the evening at a banquet held in his honour, Kagame praised Abiy for being the leader he was stressing that the trust and confidence Ethiopia entrusted in him was for a good reason.

Abiy also had some nice words for his guest: ‘President Kagame is a freedom fighter, great gift for the people of Rwanda and for the continent. After fighting for freedom it is difficult to establish institutions, but when you go to Rwanda you can see how this leader has changed the country.’

In terms of gifts, Ethiopia gave Kagame a cow and a calf whiles he also gave Abiy a dance picture of a traditonal warrior.

President Kagame on being given a cow: Thank you for the great gift that touches right to the heart of who we are and the many things in our culture which we share. This is a very nice cow and its calf, it will increase the size of my herd and will have a special position. pic.twitter.com/Bg13MwXoMF

President Kagame on his gift to Prime Minister Abiy: This is a dance picture – traditionally it is called a warrior dance; when you have a herd of cows or are a leader of a nation, you have a warrior and leadership spirit but you also need to enjoy the pleasure of dancing. pic.twitter.com/3fJxf70p5K