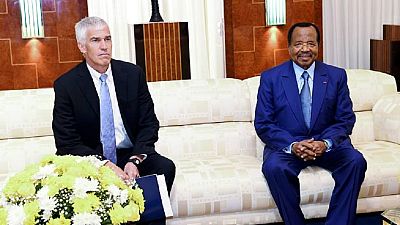 Two Cameroonian ministers have responded to remarks by the United States ambassador who late last week accused government of complicity in deadly violence in the restive Anglophone regions.

First was Information Minister Issa Tchiroma Bakary who in an interview with the RFI channel insisted that the nation was rather the victim to secessionist violence. “I am really surprised at the statement of US Ambassador, We are victims, the nation as a whole a victim,” he said.

In a more formal response, the Minister of External Relations issued a statement calling on the diplomat to respect Cameroonians.

It added in part that the country was never going to allow a leader to be imposed on it by the west – in apparent reference to the call by the ambassador for president Biya to start thinking about his political legacy.

Ambassador Peter Henry Belerin had met with President Paul Biya in Yaounde to discuss bilateral issues ahead of the May 20 national unity day.

In a read out issued by the U.S. embassy in Yaounde, the ambassador said government forces and separatists were culpable in violence in the two regions – northwest and southwest.

He added that government was employing targeted killings and also detaining people without recourse to the law.

Meanwhile, the position of the ambassador was buttressed by the bishop of Mamfe, a town located in the southwest region.

According to Bishop Andrew Nkea, dialogue was needed urgently to avert a useless and senseless civil war in which the government and separatists were committing grave crimes against the people.

The bishop stressed that whiles the army was burning down entire villages, the separatists were also burning down schools and other state institutions. The international Crisis Group has identified the church as the most potent political mediator.

Its April 26 report titled: Cameroon’s Anglophone Crisis: How the Catholic Church Can Promote Dialogue, averred that the clergy needed to united with a strong common position (between federalism vs. decentralisation) in order to be seen as credible mediators.