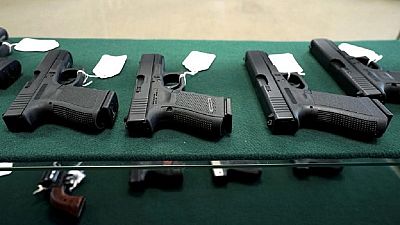 Police in Ethiopia say they have intercepted over 350 pistols being smuggled into the country via Sudan.

Police said on Wednesday that the weapons were seized at the Awrora village, located in the northern Tigray regional state.

State broadcaster, EBC, quoted Capitan Eshete Awoke, head of security office in the area as confirming the incident. He added that the successful interception was down to joint efforts of security forces and the army.

The driver and assistant of the vehicle that was carrying the materials have been placed under formal investigations, the EBC report added.

In a related development on security issues, the government communication office on Wednesday reported the arrest of thirteen contrabandists. They were engaged in illegal trade of vehicles, sheet metals, clothes, televisions, among others.

Investigations are underway following which they will be hauled before the courts. The government has also taken measures against illegal employment agencies, state-media outfit FBC reported.

Ethiopia is currently under a six-month state of emergency imposed in February 2018, a measure government said was to contain spreading violence.

In March this year, the Command Post administering the SoE said with the support of the public, it had intercepted about 20,000 ammunitions across the country.

Prime Minister Abiy Ahmed who ‘inherited’ the State of Emergency has yet to publicly comment on it despite calls for it to be lifted by activists and members of the diplomatic community.