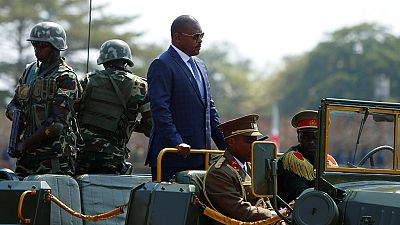 Burundians vote on Thursday in a referendum that would let President Pierre Nkurunziza stay in power until 2034, raising fears of deeper political repression and ethnic conflict in the Great Lakes nation only a generation after the Rwandan genocide.

Nearly half a million have fled since Nkurunziza won a third term in a violent election in 2015. The East African country has the same ethnic makeup as its neighbour Rwanda, where the constitution has also been changed to give the president the opportunity to remain in office.

Opposition politicians and rights groups have cited numerous examples of repression, from arrests of dissidents, to the breaking up of “no” rallies, to death threats issued by the Imbonerakure, the youth wing of Nkurunziza’s ruling CNDD-FDD.

In a sign of the poisonous political atmosphere, the party’s secretary general told a rally in the capital, Bujumbura, this week that those who voted against the proposed changes to the constitution were “enemies of the nation”.

BBC broadcasts were suspended this month for airing views deemed “inappropriate” and ethnically divisive. Voice of America was also suspended but it said its local language programmes were still available on short wave radio, providing one alternative to the CNDD-FDD-dominated state media.

Nkurunziza, a former sports teacher and guerrilla leader from the Hutu ethnic majority, has ruled the landlocked nation, one of the world’s poorest, since the end in 2005 of a civil war in which 300,000 people were killed.

A free and fair vote?

The government has denied allegations of repression and says the vote will be free and fair. A ruling party member who urged government supporters to throw opponents into a lake was jailed last month.

Nonetheless, it is highly likely voters will approve constitutional amendments that would let Nkurunziza, who was recently granted the title “visionary” by his party, run for two more seven-year terms from 2020.

His opponents said he was already ineligible to run in 2015.

Much of the opposition’s concern centres on the Imbonerakure, whose name means “those who see from far” in Kirundi, the predominant language. The group was implicated in ethnic violence in 2015.

“The Imbonerakure spent nights touring villages, telling our members not to attend our meeting or else be arrested, prosecuted or killed,” said Pierre Célestin Ndikumana, a member of parliament from the Amizero y’Abarundi opposition coalition.

“No one will dare to come out against it in a concerted effort,” he said.

Many Burundian refugees are now living in Rwanda, where 800,000 ethnic Tutsis and moderate Hutus were killed in a 1994 genocide orchestrated by Hutu supremacists.

Rwandan President Paul Kagame has already changed the constitution to allow him theoretically to remain in power until 2034. Uganda’s long-time ruler, Yoweri Museveni, is also pushing to remove presidential age-limits.