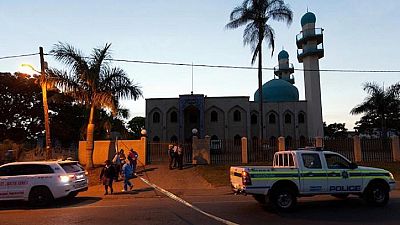 Police were called to the Imam Hussein mosque in the South African province of KwaZulu Natal after an explosive was discovered Sunday night on the premises, local media portals have reported.

The mosque located in Durban is incidentally the same facility that was attacked last week with assailants slitting the throats of worshippers gathered for the midday prayers.

Of the three people whose throats were slit, one is said to have died whiles the two others are in critical condition as per the last reports.

Police are still at the scene of the deadly KZN mosque attack. An 'explosive device' was found in same mosque on Sunday night. (EmExDurban) pic.twitter.com/O7GzyLS5jU

Even though police have yet to make any arrests, President Cyril Ramaphosa on Sunday waded into the issue whiles sending his Ramadan message to Muslims.

“President Ramaphosa’s thoughts particularly go out to the Muslim community of Verulam, KwaZulu-Natal, who suffered violence and tragedy in a place of worship several days ago.

“The President expects that the perpetrators will be brought to book and that the community of Verulam will be able to experience Ramadan as the period of peace and goodwill it is meant to be,” a statement from the presidency read.

South Africa, one of the continent’s most industrialized countries has a large expatriate community and attracts many tourists but has seldom been associated with Islamist militancy.

Prem Balram, a spokesman for Reaction Unit SA, a private emergency service, who was among the first on the scene said that the motive of the attack was not clear but the three suspects, who fled in a white car, had been identified as Egyptian, he added.

“The suspects were Egyptian males. The local people here identified them,” Balram said at the time.

A section of the mosque was set ablaze and smoke was billowing from the side of the building, Balram said. One of the attack victims jumped from a side window of the smoking building.