Mnangagwa's 'Zimbawe is open for business' policy to get legal backing 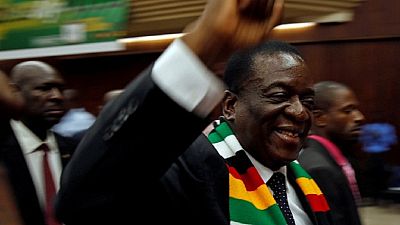 Zimbabwe is working on a new investment law to open up the economy to foreign investors, President Emmerson Mnangagwa said on Wednesday, part of his government’s drive to revive an economy that stagnated under Robert Mugabe last years in power.

While giving the main speech during Zimbabwe’s independence celebrations, the first without Mugabe since 1980, Mnangagwa acknowledged the country had made mistakes and missed on investment opportunities in the recent past.

Mnangagwa, 75, became president in November with support from the military, which turned against the 94-year-old Mugabe and forced him to resign following a de facto military coup.

The Investment and Business Facilitation Bill, which seeks to give legal underpinning to Zimbabwe’s commitment to opening up the economy is undergoing due legal process.

Zimbabweans are set to vote in the first post-Mugabe polls in July, where Mnangagwa will face 40-year-old Nelson Chamisa, the main opposition Movement for Democratic Change’s new leader, who also attended the independence celebrations.

Mnangagwa urged all political leaders to shun violence during the election period.

He is trying to roll back some of Mugabe’s policies that investors said discouraged investment.

His ‘Zimbabwe is open for business’ policy is meant to attract foreign capital after years of isolation under Mugabe.

Mnangagwa said the government was preparing a new bill that would simplify investing procedures, cut bureaucracy and create a ‘one-stop shop’ for investor registration requirements.

Currently, investors take up to 90 days to set up a business while dealing with several government departments.

“The Investment and Business Facilitation Bill, which seeks to give legal underpinning to Zimbabwe’s commitment to opening up the economy is undergoing due legal process,” Mnangagwa said.

The southern African nation, which adopted the U.S. dollar in 2009 after its currency was wrecked by hyperinflation, is gripped by shortages of cash, unemployment of more than 80 percent and crumbling public infrastructure like roads and rail.

Mnangagwa said while he recognized the hardships caused by shortages, these would not be resolved overnight. He said cash imports would be increased while the government would seek financing from regional and international institutions.

Mnangagwa did not comment on his government’s decision to fire thousands of striking nurses as the new administration sought to keep a lid on labour unrest.