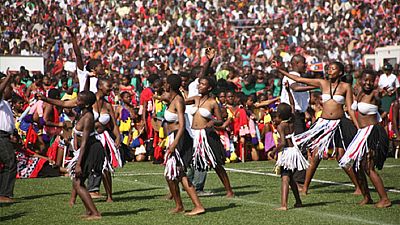 Police fired rubber bullets at protesters in Swaziland on Friday while they marched against worsening living conditions and the cost of celebrations to mark the 50th anniversary of the absolute monarchy.

More than 2 000 people took to the streets to take part in a rare demonstration organised by Trade Union Congress of Swaziland (TUCOSWA) in the administrative capital Mbabane.

One protester was injured in the thigh when police fired rubber bullets at the crowd angered by celebrations marking independence from Britain in 1968 that coincide with the birthday of King Mswati III.

Police tussled with protesters, some of whom burnt tyres and blocked roads, as they made their way to the prime minister’s office to deliver a petition.

Some marchers attempted to tear down the gates at the PM’s office and force their way inside but were blocked by police.

Regional media have claimed that Swaziland’s government had purchased a fleet of luxury BMWs for the occasion, something that officials have denied.

The Times of Swaziland daily reported that chief justice Bheki Maphalala had instructed judges to contribute at least $165 each to the festivities.

“Our hospitals have run out of medicine. Of course, ordinary citizens can’t afford to go to Asia or Europe to get proper medical care,” said TUCOSWA official Muzi Mhlanga.

“Authorities have instructed the pensions fund and the provident fund to contribute millions of our hard-earned money to fund the celebrations.”

TUCOSWA said that civil servants would receive no pay hike to meet the increasing cost of living while senior ministers received increases of almost one third.

Friday’s march was significant for Swaziland where dissent is stifled and mass protests are rare.

King Mswati III took the throne of the tiny southern African kingdom in April 1986 and has ruled for more than 31 years.