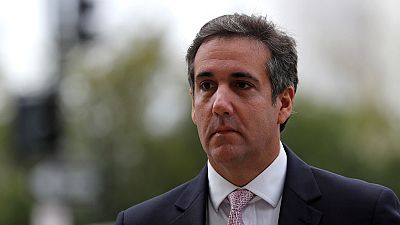 Cohen’s lawyer, Stephen M. Ryan, said that U.S. prosecutors conducted a search that was partly a referral by the Office of Special Counsel, Robert Mueller.

Mueller is investigating whether members of Trump’s 2016 campaign colluded with Russia during the U.S. presidential election. Trump has called the probe a “witch hunt” and denied any collusion.

It’s a disgraceful situation. It’s a total witch hunt. I’ve been saying it for a long time.

The raid could increase legal pressure on the president, because it involves the records of his longtime attorney and indicates a second center of investigations in Manhattan, alongside Mueller’s Washington-based probe.

Trump reacted with unusually harsh language to news of the raid.

“It’s a disgraceful situation. It’s a total witch hunt. I’ve been saying it for a long time,” Trump said at the opening of a meeting with military and national security advisers to discuss Syria.

Asked whether he would fire Mueller, Trump said, “Well, I think it’s a disgrace what’s going on. We’ll see what happens.”

Trump cannot fire Mueller directly, but he could order Deputy Attorney General Rod Rosenstein, who oversees the special counsel’s probe, to end it, or Trump could fire Rosenstein if he refuses.

Federal prosecutors are investigating Cohen for possible bank and tax fraud, and for possible campaign law violation in connection with the Stormy Daniels payment, and perhaps other matters having to do with foreign support to Trump’s 2016 campaign, a second source familiar with the investigation said.

The New York Times reported on Monday evening that Mueller is investigating a $150,000 payment made in September 2015 by a Ukrainian billionaire, Viktor Pinchuk, to Trump’s charitable foundation in exchange for a 20-minute video appearance by Trump at a conference in Kiev.

Cohen solicited the Pinchuk donation, the Times reported, citing three sources it said were briefed on the matter, although it was not immediately clear if Monday’s raids sought information on that issue.

Trump had declared his candidacy for president in June 2015.

Cohen did not immediately respond to Reuters for a request for comment on the raids. A spokesman for Mueller had no comment.

Cohen has said that he paid the $130,000 settlement money to Stormy Daniels, whose real name is Stephanie Clifford, from his own pocket through a personal home equity loan. Trump, in comments to reporters on Air Force One last week, said that he did not know about the payment.