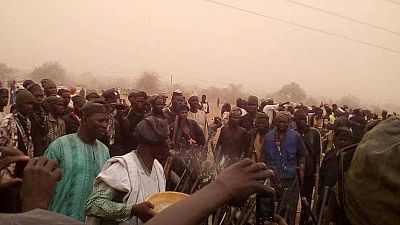 Local hunters in Northeastern Nigeria have asked the government to utilise their knowledge of the terrain and hunting skills in the fight against Boko Haram.

The appeal was made as over 15,000 hunters gathered in Adamawa State for their annual oath-taking festival, known as Salala to fortify themselves.

The hunters, all dressed in warfare attire, with their guns dangling over their shoulders, vowed to crush Boko Haram, cattle rustlers as well as kidnappers.

So, we are ready to pursue the terrorists and other bush hidden criminals including cattle rustlers and kidnappers as well as armed bandits, because we know the terrain very well.

The leader of the hunters in North eastern states, Muhammad Usman Tola, told the Africanews correspondent in Nigeria, Ibrahim Abdul’Aziz, that, ‘‘the hunters had so far played significant roles in the fight against Boko Haram’‘ adding that ‘‘it is common knowledge that we (hunters) are familiar with the terrain in dreaded forests, like the Sambisa forest’‘.

“We are appealing to the Nigerian government to allow us join the fight against Boko Haram at the Sambisa forest. We have thousands that were ever ready to join and assist,’‘ Tola said.

The Sambisa forest in Borno state was a popular hideout for Boko Haram militants and the Nigerian army has in the past conducted several raids to counter the insurgency.

‘‘So, we are ready to pursue the terrorists and other bush hidden criminals including cattle rustlers and kidnappers as well as armed bandits, because we know the terrain very well.’‘

Tola however added that the hunters needed the government to assist them with ammunition, transportation and logistics.

Hunters in north-east who have knowledge of the terrain have been assisting the military and other security agencies in the fight against insurgency.

In 2014, the Adamawa,Borno and Yobe state governments announced that they would officially enlist the services of local hunters and vigilantes, called Civilian JTF, to liberate communities captured by Boko Haram insurgents.

This year’s event brought together hunters from the Northeastern part of Nigeria and some participants from Cameroon, all gathered to observe the annual Salala rites.

‘‘And very interesting, we remain one big family devoid of religious or tribal sentiments, that is why today we have over 15,000 hunters from Taraba, Gombe, Bauchi, Borno, Yoba and Adamawa and other neighbouring countries who converged for event,’‘ Tola said.

The highlights of the occasion were the drinking of concoction by the hunters for protection and the conduction of rituals on the hunters’ Dane guns to function properly against the ‘enemy’.