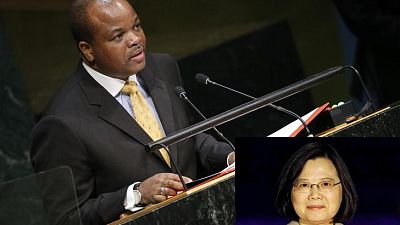 <p><strong>Taiwan President Tsai Ing-wen will visit one of the island’s oldest and most reliable diplomatic allies next month, amid growing pressure from China to whittle away the number of countries with which Taiwan has formal ties.</strong></p> <p>President Tsai is expected in the southern African nation of Swaziland from April 17 to April 21, with this year marking half a century of diplomatic ties.</p> <p>The only other African ally Taiwan has in Africa is Burkina Faso.</p> <p>This will be Tsai’s first trip to Africa since assuming the presidency in 2016. As president, she has also visited some of Taiwan’s other friends, including Paraguay, Guatemala, Tuvalu, the Solomon Islands and the Marshall Islands.</p> <h3>Race for allies</h3> <p>Only 20 countries still recognize Taiwan, most of them poor nations in Central America, the Caribbean, Pacific and Africa.</p> <p>China considers self-ruled Taiwan to be a wayward province, ineligible for state-to-state relations, and has slowly managed to cut the dwindling number of countries which maintain ties with Taipei.</p> <p>Last year, China established relations with Panama, which had for decades been a steadfast Taiwan ally, in a major diplomatic coup for Beijing.</p> <p>China’s hostility towards the democratic island has risen since Tsai, from the pro-independence Democratic Progressive Party, won the presidency.</p> <p>China fears she wants to push for formal independence, though Tsai says she wants to maintain the status quo and peace.</p> <p>China and Taiwan have tried to poach each other’s allies over the years, often dangling generous aid packages in front of developing nations, though Taipei struggles to compete with an increasingly powerful China.</p> <p>Some countries have switched ties several times.</p> <p>Chinese Foreign Minister Wang Yi said this month it was in the best interests of Taiwan’s few remaining diplomatic allies to recognize an “irresistible trend” and ditch Taipei in favor “one China” ruled by Beijing.</p> <p>The Vatican is likely next on the list, as the Holy See and China edge closer to an accord on the appointment of bishops.</p> <p><strong><em><span class="caps">REUTERS</span></em></strong></p>