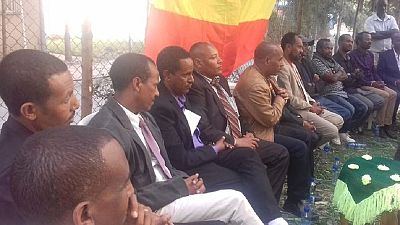 <p><strong>The Ethiopian government is being blasted by human rights and press freedom activists after it rearrested bloggers and opposition leaders that it had released a few weeks ago.</strong></p> <p>Andualem Aragie, leader of Ethiopian opposition <span class="caps">UDJ</span> party, journalists Eskinder Nega and Temesgen Desalegn, bloggers Befeqadu Hailu and Zelalem Workagegnehu were arrested on Sunday during a celebration organized for all the political prisoners released recently. </p> <p>Ethiopia has already released more than 6,000 prisoners since January, including some high-profile journalists and opposition leaders. </p> <p>Declaring the campaign to release political prisoners, the former prime minister Hailemariam Desalegn said the releases were designed to increase “political space” in Ethiopia following anti-government protests that began in 2015.</p> <p>Desalegn has since resigned and a state of emergency has been imposed in the country, despite defiant protests by the opposition in the Oromiya and Amhara regions.</p> <p>Amha Mekonnen, who represented a number of the detainees told the Associated Press that his clients were arrested for violating the state of emergency., in addition to displaying a prohibited national flag.</p> <p>“I also understand they were accused of gathering en masse in violation of the state of emergency rule.”</p> <p>Under Ethiopia’s latest state of emergency declared earlier this year, people are prohibited from such gatherings without authorities’ prior knowledge. </p> <p>American based Ethiopian news agency, Zehabesha, had earlier reported that police accused the opposition leaders who had gathered at the invitation of Andualem Aragie, Andualem Aragie, of using the original Ethiopian plain flag, which does not have the new <span class="caps">EPRDF</span> blue disc with 5 point star in the middle.</p> <p>Ethiopians in the opposition have on several occasions expressed their displeasure with the new flag arguing that the <span class="caps">EPRDF</span> blue disc star symbolises ethnic division.</p> <p>A proclamation regarding the use of the Ethiopian flag prohibits the display of the flag without the emblem at its center and those contravening the law could be sentenced to up to a year and a half in prison.</p> <blockquote class="twitter-tweet" data-partner="tweetdeck"><p lang="en" dir="ltr"><a href="https://twitter.com/hashtag/Ethiopia?src=hash&ref_src=twsrc%5Etfw">#Ethiopia</a> scores another own goal. Re-arrests bloggers <a href="https://twitter.com/hashtag/EskinderNega?src=hash&ref_src=twsrc%5Etfw">#EskinderNega</a>, <a href="https://twitter.com/hashtag/TemesgenDesalegn?src=hash&ref_src=twsrc%5Etfw">#TemesgenDesalegn</a>, <a href="https://twitter.com/hashtag/BefeqaduHailu?src=hash&ref_src=twsrc%5Etfw">#BefeqaduHailu</a> <a href="https://twitter.com/hashtag/MahletFantHun?src=hash&ref_src=twsrc%5Etfw">#MahletFantHun</a> <a href="https://twitter.com/hashtag/ZelalemWorkagegnehu?src=hash&ref_src=twsrc%5Etfw">#ZelalemWorkagegnehu</a></p>— Angela Quintal (@angelaquintal) <a href="https://twitter.com/angelaquintal/status/977987560269115392?ref_src=twsrc%5Etfw">March 25, 2018</a></blockquote> <script async src="https://platform.twitter.com/widgets.js" charset="utf-8"></script> <blockquote class="twitter-tweet" data-partner="tweetdeck"><p lang="en" dir="ltr">Good AM! It is unfortunate that while Ethiopians are patiently waiting for the ruling party <span class="caps">EPRDF</span> to put its differences aside & come up with a leader, the army has intensified its crackdown against civilians in several cities across the country. We will bring you the latest. <a href="https://t.co/fAeojydqYS">pic.twitter.com/fAeojydqYS</a></p>— Addis Standard (@addisstandard) <a href="https://twitter.com/addisstandard/status/978149866319826945?ref_src=twsrc%5Etfw">March 26, 2018</a></blockquote> <script async src="https://platform.twitter.com/widgets.js" charset="utf-8"></script> <p>Eskinder recently told journalists in the Ethiopian capital that ‘he was prepared to go back to prison’ if that was the price to be paid for pursuing democratic reforms in the country.</p> <p>After his release, <span class="caps">UDJ</span> leader Andualem Aragie equally condemned recent tribal conflicts in the country which he described as ‘barbarism that do not belong in the 21st century’.</p> <p>“It is very bad to have an ethnic mindset, we must work together for our country. Dictatorship is inhuman but racism is worse. We must fight this kind of barbarism to make a peaceful country. We are not human if we attack somebody based on the languages they speak or the tribe they belong to. “</p> <p>It is unknown when the arrested journalists, bloggers and opposition leaders will be released.</p> <p><strong><em>Photo Credit: Addis Standard</em></strong></p>