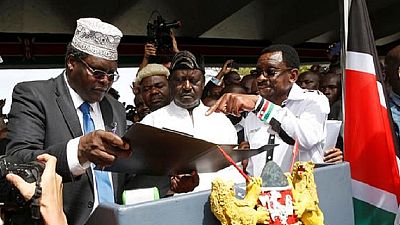 Miguna was deported to Canada on February 6, 2018 after being dramatically arrested for his role in the mock swearing-in of Raila Odinga as the People’s president.

The High Court however ordered the government to facilitate his return after having ruled that his deportation was illegal.

I am scheduled to arrive at the Jomo Kenyatta International Airport on Monday, March 26, 2018 at 2:30pm aboard Emirates EK19 via Dubai.

His lawyers led by James Orengo said they were satisfied with efforts made by the government to facilitate his return as ordered by the courts.

“We are happy and satisfied with work that has been done so far in compliance with the court order and we will keep on consulting until Miguna arrives and safely enters in the territory of Kenya,” said Orengo.

Orengo confirmed that the Ministry of Interior will allow Miguna safe entry into the country, and added that they have requested government to allow Miguna’s lawyers, family and friends to receive him at the airport.

As part of the reconciliation deal reached between opposition leader Raila Odinga and Kenyan president Uhuru Kenyatta, government agreed to withdraw charges against all those involved in Odinga’s illegal inauguration including Miguna.

Miguna’s lawyers consequently also confirmed that they will no longer pursue the court case once Miguna is back, stating his return to the country is the important subject.

Will Miguna work with Raila Odinga?

Miguna who has since criticised the reconciliation between Odinga and the government, has staged several talks in Canada, US and UK ahead of his return.

“I am scheduled to arrive at the Jomo Kenyatta International Airport on Monday, March 26, 2018 at 2:30pm aboard Emirates EK19 via Dubai,” he said in a statement.

The vocal opposition politician has been meeting Kenyans in the diaspora, discussing various issues with them including dual citizenship, while also promising to pursue the struggle to fight electoral injustices in the country.

On March 24th, 2018, the #NRMKe battalion moves to LONDON, UK before landing in Nairobi, Kenya on March 26th. All roads lead to London on March 24th. Viva! https://t.co/lxIgsWQrxc