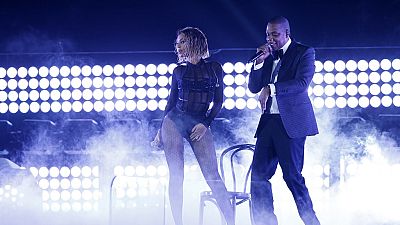 The image features the pair sitting on a motorbike with a cow skull on the handlebars, echoing Mambéty’s 1973 film Touki Bouki.

Social media users have been pointing out the reference and

Touki Bouki is a 1973 Senegalese drama film, directed by Djibril Diop Mambéty. It was shown at the 1973 Cannes Film Festival and the 8th Moscow International Film Festival. Mory, a charismatic cowherd who drives a motorcycle mounted with a bull-horned skull, and Anta, a female student, meet in Dakar. Alienated and tired of life in Senegal, they dream of going to Paris and come up with different schemes to raise money for the trip. You can watch the full film on YouTube. #OTR #toukibouki #senegal #bull #cow #billions #motorcycle #love #drama #romance #aspirations #beyonce #jayz #djibrildiopmambety #images #respecttheshooter #papsambasow

Beyonce and Jay Z pay tribute to my son’s godfather, Djibril Diop Mambety, whose film #ToukiBouki is shaking up the world 45 years after it was made. Some of us knew magic when we saw it. #blackworldcinema #blackartmatters pic.twitter.com/Bj9TAiIzo6

This On the Run Tour II Promo Poster References a Vintage Senegalese Film You Need to Check Out..

The image of Beyoncé and Jay-Z on a motorbike is inspired by a scene from Djibril Diop Mambéty’s 1973 film Touki Bouki.

heres a link for “Touki Bouki,” a 1973 Senegalese film about two lovers who steal money and clothing, then book passage to Paris to start new lives. It’s considered an African cinema classic.https://t.co/wbk7FJ6r67

Touki Bouki (The Hyena’s Journey) is considered by many to be his most important film.

It tells the story of two lovers, Mory and Anta, who fantasize about fleeing Dakar for a mythic and romanticized France. The film follows them as they mobilise the required funds for travel. They both make it to the steamliner that would transport them to Paris, but before it disembarks, Mory is drawn back to Dakar and cannot succumb to the seduction of the West.

Touki Bouki won the Special Jury Award at the Moscow film Festival, the International Critics Award at Cannes and was ranked #52 in Empire magazines “The 100 Best Films Of World Cinema” in 2010.

While the globally acclaimed power couple are yet to officially explain the reference as used on the promotional poster, Beyoncé has in the past referenced a number of African cultures including Yoruba deities during her performance at last year’s Grammy awards in the US.