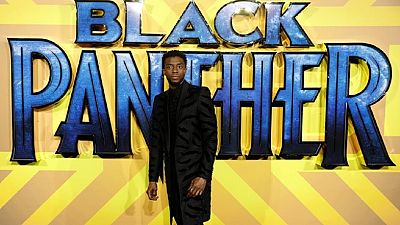 British actor of Ugandan origin, Daniel Kaluuya who stars in the Marvel film celebrated for its black cast and African superhero story, was nominated for best actor for his role in ‘Get Out’.

You colonizers are in the presence of royalty.

Can you say Wakanda forever? We need to talk about the #BlackPanther cast in the Glambot on the #Oscars redcarpet. pic.twitter.com/EiAY3GXSnG

When you had the #Oscars at 2, but needed to be back in Wakanda at 3. pic.twitter.com/QNrFODuVro

the queens of wakanda have arrived #Oscars pic.twitter.com/2HmoQJiw6h

Black Panther has continued to rake in revenues, coming in at No. 1 at the U.S. box office for the third week in a row, crossing the $500 million mark domestically and taking the title of 10th highest-grossing domestic release of all time.

Many are hoping that the success of the movie with a black superhero will turn the tide in Hollywood and have more blacks cast in films, in addition to telling more African stories.