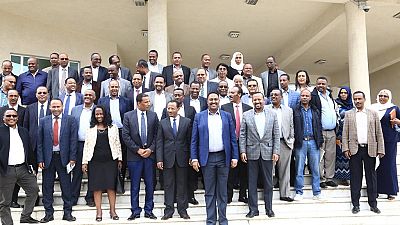 A bloc in Ethiopia’s ruling coalition is faced with a tight task in an upcoming parliamentary vote to ratify a state of emergency (SoE) imposed by government reportedly to quell spreading insecurity.

Members of Parliament from the Oromo People’s Democratic Organization (OPDO) are being lobbied by online activists to vote against the measure when it is put to vote on Friday.

As a bloc with a substantial number of legislators (around 180) it is believed that the SoE will be defeated if they refuse to vote along with the government.

Online activists led by Jawar Mohammed have marked the vote as one that will underline OPDO’s allegiance to the Oromo people or to the regime. But the party spokesperson is on record to have said that they supported the SoE and other political reforms being pursued by the government.

The Oromia region has been largely defiant of the nationwide measure with youth in the town of Nekemte clashing with federal forces deployed in the region. Most Oromos aver that the government wants to restrict freedom of expression by the state of emergency move.

Jawar and other activists had since Monday posted phone contacts of MPs urging their constituents to lobby them to kick against the SoE.

It turned out that some people ended up threatening the lawmakers. The Command Post in charge of the SoE issued a warning against the threats and asked federal forces to take necessary action to contain protesters in Oromia.

There is talk that the new Prime Minister will be from the OPDO. The party recently replaced its leader Lemma Megerssa with Dr Abiy Ahmed – a strategic move as it positions to pick the Prime Minister slot for the first time.

The Premier slot became vacant after outgoing Hailemariam Desalegn tendered in his resignation according to him, to pave way for greater political reforms. The SoE was declared a day after his resignation.