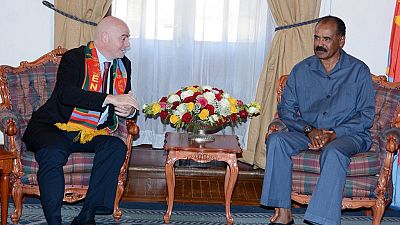 According to Information Minister, Yemane Meskel, Infantino was hosted by Afwerki at the Denden Guest House in Asmara. He also visited a grassroots training event at the Asmara stadium.

The FIFA boss, who was accompanied by other top officials including his secretary-general, Fatma Samoura, also met with the Eritrean Commissioner for Sports and Culture, Ambassador Zemede Tecle and also toured UNESCO Heritage sites.

The FIFA president has recently had African related engagements including an interview session in Mauritania on the sidelines of the FIFA Summit.

He joined Nigerian Football Federation’s Awards night last week before flying to France to join Liberian President and Ivorian international Didier Drogba in a visit to Elysee palace where they had lunch with President Emmanuel Macron.

Fulfilling weekend it was in Mauritania. I Interviewed FIFAcom Prez Gianni Infantino on the sidelines of the #FIFASummit. The interview aired on Mauritania television & radio. He spoke on a wide range of issues including racism. Also airing all week across Africa. ffrimofficiel pic.twitter.com/YPHsa663jL

Africa was on the agenda as FIFA President Gianni Infantino met the likes of GeorgeWeahOff & didierdrogba at an EmmanuelMacron lunch in the Elysee Palace ???