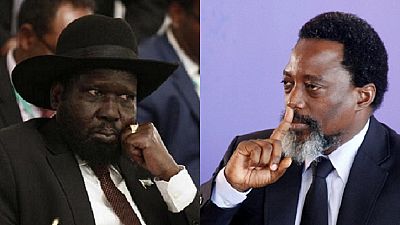 Pope Francis has declared a a day of fasting and prayer for crisis-ridden Democratic Republic of Congo and South Sudan.

Both countries have been dogged by security and humanitarian crisis over the past few years. The Holy Father has thus called for spiritual intervention asking the faithful to fast and pray on February 23 for peace.

The event is also aimed at seeking peace for the world. The Pope has invited non-Catholic faithful to also play a part in the search for peace in the two countries and around the world.

His call was answered by the Head of the global Anglican Church, Justin Welby, who enjoined people to follow the Papal call. Welby also shared experiences of what he saw in previous trips to DRC and South Sudan.

“On my visits to both countries in recent years, it’s been impossible to describe the overwhelming scale of destruction. These conflicts are causing terrible loss of life. Huge numbers of people have been forced to flee their homes, which is tearing apart families and communities.

“There are more than a million new internally displaced people. Famine is causing great suffering and danger. In South Sudan, up to 6 million people face starvation. Sexual violence and humiliation are being committed on the most atrocious scale in both countries.

“On my last visit there, I listened to a political leader tell me about the suffering and slaughter of her people. I visited a refugee camp in Uganda filled with South Sudanese children whose families had fled their homes to escape death,” an official statement read.

He also offered issues over which the faithful could pray whiles fasting:

• For the leaders of South Sudan and DRC to turn their hearts from war to peace – and a peaceful solution to political problems.

• For all refugees from these countries.

• For forgiveness, healing and new relationships.

• For the local churches doing so much to look after people who are suffering, and to bring peace.

The situation in DRC largely hinges on the continued stay in office of Joseph Kabila whose mandate expired late 2016. The inability to organize polls meant he continued to stay in power.

Anti-Kabila protests by civil society groups including the church has been violently cracked down upon. Elections are, however, slated to be held later this year. Kabila has said he will not stand and promised to appoint a successor in July this year.