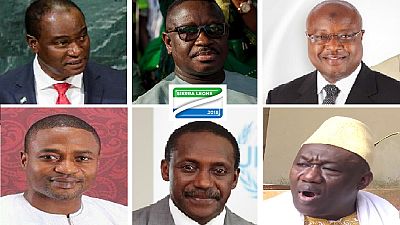 Sierra Leoneans will go to the polls for general elections meant elect a new president and vote into office a new parliament.

The March 7, 2018 polls is key for the main reason that its conduct will underline the growth of electoral democracy in the West Africa region. History will be made either way, whether the ruling party or the opposition wins the presidency.

But outgoing Ernest Bai Koroma will hope to handover to his party’s candidate whiles the main opposition party will hope to stage a comeback after a decade out.

Both parties have been hit by breakaways as some top guns on both sides have left to form parties with the hopes of upsetting the odds.

According to the Sierra Leone National Electoral Commission (NEC) sixteen candidates have filed to run for president. They include two women and fourteen men.

As part of our coverage of the process, we present a profile of the six main candidates in the race.

Born April 30, 1951, the former central bank governor turned politician is aiming to continue with the APC government’s work even as Bai Koroma steps down. He will become the second APC candidate to occupy the presidency.

Kamara held the post of Central Bank governor between 2007 – 2009. He subsequently joined the APC and served in two top cabinet positions. Minister of Finance and Economic Development (2009 – 2012) and Foreign Affairs portfolio between 2012 and 2017.

He stepped down from his diplomatic responsibilities after the party elected him in October 2017 to lead their charge for a third straight term in office. This is his first shot at the presidency, he is credited with spearheading blueprint for Koroma’s first term in office.

He is a trained economist who holds a Bachelors Degree in Economics from the country’s famed Fourah Bay College. He also holds a PhD in Development Economics (1986) from the Bangor University in Wales, United Kingdom.

Samura is also celebrated as the lead technocrat who oversaw the country’s debt cancellation in 2007. The economy boomed under his tenure whiles Sierra Leone’s international relations soared during his tenure as chief government diplomat.

He is a Roman Catholic despite growing in a Muslim environment, most members of his family are Muslims. He is married to Elizabeth Massah Kamara.

The vice presidential candidate of the APC is Bah Chernor Ramadan Maju.

He has also tasted how it feels to be on the ballot paper, he was the Sierra Leone Peoples Party’s candidate for the last elections. He lost to outgoing Ernest Bai Koroma who beat him in the first round of voting.

He is a Roman Ctholic married to Fatima Bio a practicing Muslim and a Gambian national. They got married in an interfaith ceremony in London in 2013. The couple have a child but Maada Bio has three other children from a previous marriage.

The vice presidential candidate of the SLPP is Jalloh Mohamed Juldeh

Currently leader and chairman of the Alliance Democratic Party, Mohamed Mansaray is branded a pro-poor politician who says he is on a mission to better the lot of the poor folks in the country.

He formed the ADP after breaking away from ruling APC. The United States trained psychologist is also a known critic of the ruling class and his former party, president Bai Koroma and Sierra Leone’s political elite.

He had a fallout with senior APC members in 2014 following which he left to form the ADP same year. He contested for a legislative seat in 2015 and 2016 but lost both bids to the APC candidates in two different constituencies.

He is a known businessman who operates the Patriotic group of companies – insurance, shipping and logistics. Mansaray fled the civil war in 1997 to the U.S. where he received his degree and Masters before working in Human Services Agencies.

He is a Muslim and is married with three children. His second child is called Sierra Leona. The ADP also nominated Kamara Isata Abdulai as the vice presidential candidate

“I just can’t have things done here without running for the presidency. I want to build a middle class system in Sierra Leone. I want to make our country Sierra Leone a nation that everyone will be proud of,” he said on his official website.

Samuel Sam-Sumana until March 2015 was vice-president of the country and also a member of the ruling APC. The party sacked him before the president also fired him over claims that he had abandoned post.

According to him fear of arrest led him to seek refuge at the United States Embassy in the capital Freetown. His sacking was criticized by parties including the SLPP, trades unions and other civil society groups.

The ECOWAS court in Abuja ruled the sack as unconstitutional and ordered government to pay him damages.

He leads what could be described as a breakaway faction from the ruling party, the Coalition for Change (C4C). He is an international businessman with a strong involvement with the minerals sector.

After receiving a Bachelor of Science qualification in management information systems in Minnesota’s Metropolitan State University he also acquired diplomas in diamond treatment and in computer network support.

He returned to Sierra Leone with his family in 2007 to partner Bai Koroma in his first bid for power. He served as veep for the first term and helped Koroma secure a final term in 2012. He was mentioned in an Al Jazeera corruption sting op on timber back in November 2011.

He is a devout Muslim married to Khadijah Sam-Sumana and the couple have three children. Conteh David Bai will be running alongside Samuel Sam-Sumana as vice president

He has held posts including Director-General of UN Industrial Development Organization (UNIDO) for two-terms. He has also served as chair of UN energy and a special rep of the Secretary-General for Sustainable Energy for All.

He is leading the National Grand Coalition (NGC) which is a breakaway party from the main opposition SLPP. He has also previously served as Sierra Leone’s Minister of Trade and Industry between 1994 – 1995.

He has held positions in the Michigan State University and the University of Illinois. He is also a reputed public speaker and contributor to global discourse especially in the area of poverty alleviation and climate change.

Musa Tarawally, 51, can best be described as a politician / businessman. He has served in both the ruling APC and the main opposition SLPP in different capacities. He is, however, contesting on the ticket of the Citizens Democratic Party (CDP).

He was duly nominated after a party congress in January this year. He is a one-time youth leader of the SLPP and served as minister under the APC government. He held positions of Minister of Internal Affairs and Minister of Lands at a point.

He is on record to have stated that his love for politics started in his teens adding that he was running for the presidency because of his love for Sierra Leone.

He was sacked as Minister of Lands by President Koroma in 2015 over shady deals under his tenure. Bangura Paul Alimamy will be standing as vice president for the CDP.

The authorities detained him in December 2016 over the issue, a move he described as politically motivated given that it coincided with his declaration to run for president.

The other ten 10 presidential candidates alongside their vice presidents include: