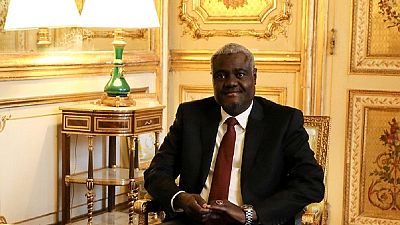 The African Union (A.U.) has commented on the political situation in Ethiopia almost a week after a state of emergency was imposed by the government.

The A.U. Commission chair, Moussa Faki Mahamat, in a statement issued on Wednesday said he was following events closely. His statement stressed the importance of Ethiopia as host of the A.U. and a member state.

“As such, Ethiopia plays a key role in promoting regional peace and security, as well as in the pursuit of the continental agenda,” he added.

The statement failed to clearly mention the state of emergency which has been top of the diplomatic agenda. The United States said it strongly disagreed with it, whiles the E.U., U.K., Germany and others cautioned the authorities to exercise it with regard for rights of citizens.

The statement continued: “The Chairperson is confident in the ability of the Ethiopian authorities and people to overcome the challenges at hand and to consolidate the remarkable progress made in the socio-economic development of the country.

“Last month, he welcomed the steps taken by the Ethiopian authorities to widen the political and democratic space. He is encouraged by the Government’s willingness to persevere on this path.

“He stresses the need for all concerned stakeholders to display a spirit of responsibility and refrain from any acts likely to undermine peace and stability. These are precious public goods without which neither prosperity nor democracy is conceivable.”

He further tasked government to push ahead with reforms and with dialogue and mutual tolerance in order to deepen the democratic culture in the country. “The stability of Ethiopia is crucial for the well-being of its people, the region and Africa as a whole,” the statement concluded.

Desalegn announced widespread political reforms in January following which thousands of prisoners were released at the federal and regional levels. The country is also expected to close a prison facility notorious for torturing detainees. The Maekelawi jail in Addis Ababa is to be turned into a museum.