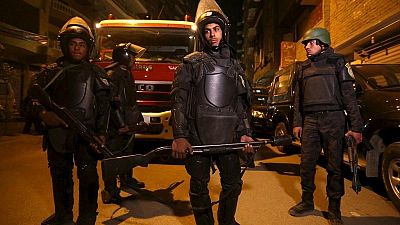 The country’s state security prosecution ordered the arrest of Abol Fotouh and several leaders of his Strong Egypt party, the news agency said.

He was one of the top presidential candidates in the country’s first elections after the 2011 uprising, taking about 18 percent of the first-round vote.

Egypt’s government claims to be in a ‘democratic transition’ but move further away with every election.

The arrests come several weeks before a presidential election in which President Abdel Fattah al-Sisi is seeking a second term in a race against a little known politician.

It also comes two days after U.S. Secretary of State Rex Tillerson called for free and fair elections during his first visit to the country.

Abol Fotouh’s niece Sanaa Ahmed told Reuters tens of policemen dressed in civilian clothing came to the house with an arrest warrant and took him away Wednesday night.

Abol Fotouh quit the Muslim Brotherhood in 2011 to mount an independent bid for the presidency and has distanced himself from the Islamist movement since then.

Abol Fotouh’s party deputy, Mohamed al-Qassas, was detained last week and is being held pending an investigation, according to the party’s Facebook page.

The party condemned the arrest and criticised what it called “the systematic targeting of the opposition politicians” in a post earlier this week.

Thirteen local and international rights groups condemned Egypt’s March presidential election on Tuesday, saying the race would neither be free nor fair.

“Egypt’s government claims to be in a ‘democratic transition’ but move further away with every election,” the groups said in a joint statement.

The country’s electoral commission has pledged to run the vote “according to principles of independence, transparency and objectivity.”