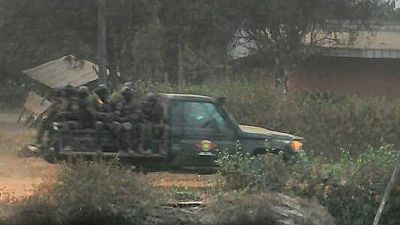 The Cameroonian army have confirmed that one of its top official was missing in the Anglophone region adding that a search was on for Divisional Officer Namata Diteng.

Diteng, a deputy head in the town of Batibo located in the northwest region was declared missing last Sunday after his burnt car was found in an isolated area.

He had been deployed to the area to ensure that work was set for the February 11 Youth Day celebration in the area. Local media reports that he was picked by unidentified gun men and sent to an unknown location.

A separatist leader, Ayaba Lucas Cho said on social media that they had abducted the officer. If confirmed it will mark a different aspect of the separatist face off with Cameroonian security forces.

Up until now, the Ambazonia Defence Force (ADF) an armed wing of the so-called Republic of Amlbazonia have been staging guerilla style attacks on security personnel deployed to the Anglophone regions. They maintain that such forces are illegal occupiers of their land.

The attacks form part of what has become known as the ‘Anglophone crisis’ which began in 2016 when the government cracked down on English-speaking lawyers and teachers who protested against working in French.

Civilians were killed, and subsequent violence against protesters has helped boost support for a separatist movement, including armed groups looking to form a new state called Ambazonia, in a campaign to split Cameroon’s English-speaking minority from Yaounde.

An army crackdown on the insurgency has forced more than 40,000 people to flee to neighbouring Nigeria, according to the United Nations.

Residents in the Anglophone regions told Reuters last week that the army burned houses in the village of Bole and shot residents on Feb. 2.

An army spokesman said claims that houses were burned and people shot in Bole were “totally false”, and he denied that soldiers were mistreating residents in other villages.