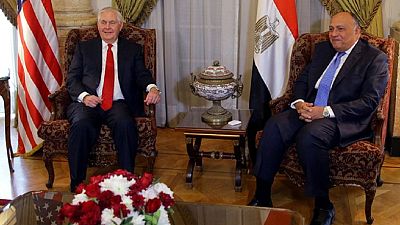 On Friday, the army and naval forces began a military operation named “Full-Scale Operation in Sinai 2018” against terrorists affiliated to the Islamic State (IS) in Sinai, and according to army statements, at least 28 militants have so far been killed and over 90 arrested.

Tillerson who addressed a press conference after holding a meeting with the Egyptian foreign affairs minister Sameh Shoukry, emphathised with Egypt which has suffered several terror attacks from the Islamic State (ISIS) and other terrorist organisations.

The high ranking American diplomat who has started his Middle East tour in Cairo will also visit Jordan, Turkey, Lebanon and Kuwait where discussions on the Syrian crisis and Middle East peace will be held.

He is scheduled to meet the Egyptian president, Abdel Fatah el-Sisi latr today. The two are expected to discuss bilateral partnerships and also coordination of key regional issues including the Palestinian-Israeli peace process.

America recently caused a stir in the Middle East and beyond when it’s president Donald Trump recognised the disputed Jerusalem as Israel’s capital, a decision that was strongly rejected by many including Egypt.