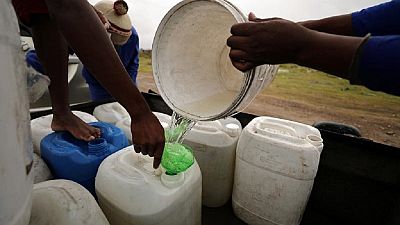 South Africa’s drought-stricken city of Cape Town has pushed back its estimate for “Day Zero,” when residents will have to start queuing for water, to May 11 from April 16, authorities said on Monday, citing a decline in agricultural water usage.

Neilson added: “All Capetonians must therefore continue to use no more than 50 litres per person per day to help stretch our dwindling supplies.”

Cape Town’s day zero has been delayed to mid-May, the city has announced. Day Zero was previously expected on April 16. The change today is mostly because water for farm irrigation from dams is being curtailed. Bad news for farmers, good news for Capetonians.

Levels of usable water in the dams surrounding Cape Town have been dropping by 1.4 per cent a day, and currently stand at around 17.2 per cent.

When they hit 13.5 per cent – estimated for April 12 – the pipeline will be shut down and the city’s four million residents will have to queue up each day for their supply from one of 200 water collection points.

The water crisis poses a risk to a vibrant tourist industry that sees almost 2 million visitors flock to Cape Town every year. The Cape Town region generally receives most of its rainfall from May to August.