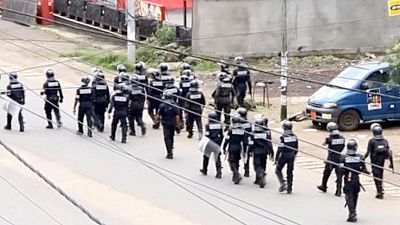 Security forces in Cameroon have killed at least five civilians in the country’s restive Anglophone region from late last week through the weekend, multiple sources have disclosed.

On Friday, two people were reportedly shot dead on a road linking Bamenda (capital of the northwest region) to a neighbouring town of Bafut.

A security source said the security officials opened fire on occupants of a vehicle after they delayed in stepping out after they were stopped.

We were going back home when the gendarmes arrested us. They opened fire at our vehicle because some of us were slow to get out.

Another person was killed in the Belo region at a time when armed officials invaded private homes ostensibly in reprisals after two officers were killed in the area. Authorities blamed the deadly attacks on armed separatists.

The other death was in Bamenda late Saturday when a young man enjoying time out with relations was shot death. His father confirmed the death after seeing his son’s body at the morgue.

“We were going back home when the gendarmes arrested us. They opened fire at our vehicle because some of us were slow to get out,” the victim’s brother said.

“My brother died after being shot. There were four of us in the car, I managed to escape and the other two were arrested,” he said on condition of anonymity.

Local media portal, Journal du Cameroon, report that bodies have been deposited at the Bamenda mortuary, some with bullet and another with cutlass attacks in what they described as a ‘bloody weekend.’

Meanwhile, the streets of Bamenda are said to have been deserted following the gunfire and deaths that resulted over the weekend.

Mamfe is also into serious town, I have just been https://t.co/XUIxo6LG2h in Bamenda, intense gunshots throughout the night, has forced inhabitants to stay in doors. Unlike Bda, where those shooting are not known,in Mamfe, my contacts said, it was Cam security forces shooting

My contacts in Bamenda also tells me: “Ghost town is a success bc of two days of sporadic but intense gunshots within some neighborhoods of the city by yet to identified persons.This has convinced parents to defy gov’t orders to send their children to school”.

Violence has flared in the past week, with armed separatist factions clashing against Cameroon security forces in several towns and villages in the two English-speaking regions after Nigeria deported the leader of the self-declared state and 46 others.

The United Nations refugee agency condemned the handing over of the 47 people, saying most of them had submitted asylum claims and their forced return was in violation of international refugee law.

More than 43,000 Cameroonians have fled as refugees to Nigeria to escape the government crackdown on the separatists, say local aid officials. The majority are in Nigeria’s Cross River state, which borders southwest Cameroon.